Writers of the Future Awards Ceremony and Workshop Details

Details have arrived at last about the whens, wheres, and hows of the upcoming Writers of the Future Awards Ceremony and Workshop. (I will confess I was getting worried they’d decided to revoke my invitation 🙂

On Sunday, August 19th the winning writers will be flown to Los Angeles and conveyed from there to sunny Pasadena, California for the week-long workshop. (The winning illustrators will arrive on Monday, August 20th, but I don’t think we get to meet them until the award ceremony).

The week will consist mainly of the writer’s workshop, led (so far as I know) by Tim Powers and K.D. Wentworth. From what I hear there are lectures (the good kind, not the scolding kind ;), usually some writing exercises, and a surreptitious interview of a random stranger (to be accomplished, I think, during a trip to the Pasadena public library), as well as guest lectures by some of the various judges (I know David Brin has done them before, as has Kevin J. Anderson).

But in what has to be one of the absolutely coolest parts of the trip, we’ll be getting a special private tour of NASA’s Jet Propulsion Lab! 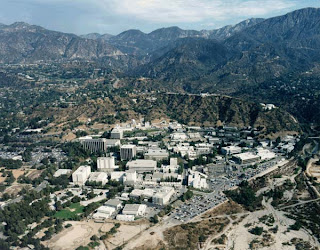 A view of the JPL campus.

The JPL is the lead US center for robotic exploration of the solar system. JPL spacecraft have visited all known planets except Pluto (my Canada includes Quebec and my solar system includes Pluto!)

I cannot tell you how my inner geek leapt for joy when I read this news. I honestly don’t know whether I’m more excited about the WOTF week or the JPL trip.

I can’t wait to see this place.

There will be a barbecue dinner on the Thursday the 23rd for all winners, arriving judges, and winners’ family members who may be attending.

The Awards Ceremony is Friday, August 24th and is open to the public, so if you’ll be in or near Pasadena that evening come and cheer. RSVP ASAP to contests@authorservicesinc.com

Saturday following the Awards event will be book signings at a local bookstore for all winners and judges (again, come and see us!)

Sunday the 26th is departure, again out of LAX.

Hey–I just realized: if I’m going to the JPL will that make me a rocket man?