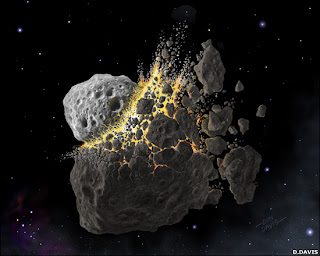 A new theory from a US-Czech research team (published in Nature) says that an “asteroid pile-up” 160 million years ago (some kind of cosmic-scale traffic jam) littered the Solar System with debris, sending fragments crashing into the Moon, Venus, and Mars, gouging out some of their most dominant impact craters, and which was also responsible for a chunk that later smashed into Earth wiping out, you guessed it, the dinosaurs (or at least those ones who didn’t survive and evolve into birds–it’s a bit fuzzy to me).

Comments Off on Rough Weekend