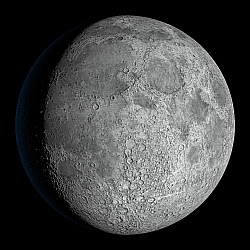 In cool news, Google (in association with the X-Prize Foundation) has announced a $30m prize pot to private firms that land a robot rover on the Moon by 2012.

The robots will have to complete a series of objectives including “roaming the lunar surface for at least 500m and gathering a specific set of images, video and data.”

I think these kind of prizes are a fabulous way to spur interest and private investment in space exploration–I really think that’s where the true future of space exploration lies. Governments have too many other priorities to dedicate the kind of time, effort, and resources to space exploration that is really needed to get us off our little blue marble.

Can you imagine the next generation of NASA’s moon explorers showing up in 2020 only to find all these roverbots that have been spinning donuts in the lunar soil for the better part of a decade?

Then again, with a new Cold War seemingly in the offing, maybe the fear of ‘Ruskies in space’ or a ‘Moon gap’ will change all of that…

Comments Off on Google Moon