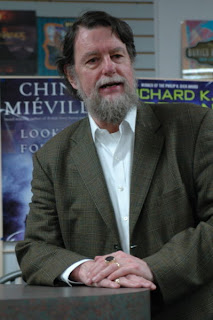 “Death is lighter than a feather, duty heavier than a mountain.”
– from The Great Hunt

I find myself profoundly sad on what would otherwise be quite a happy day.

Much in the same way that Madeleine L’Engle‘s death two weeks ago came as quite a blow to many SF fans and writers of a slightly older generation, the death of Robert Jordan is the passing of a writer who had a profound impact on me in my formative reading years.

The old joke in answer to the question “When was the Golden Age of science fiction?” is “Twelve”, as it tends to be those works you read right around the beginning of your teenage years (when you’re trying to form yourself as a person anyway) that form your interests in reading and writing SF for much of the rest of your life, and to which you look back fondly as when SF was ‘really good.’

Ironically, given my recent success, it was winning a $25 gift certificate to a bookstore for a short story I wrote in seventh grade that led me to The Eye of the World. I was wandering around a bookstore in Kingston (one long since closed) and in the fantasy section noticed a book’s cover. One of the characters was wearing a samurai helmet. Having a long-standing love of samurai I picked it up without even looking inside, along with a book on chess strategy called Principles of the New Chess that I was really excited about (I’m not kidding–I was a seriously weird 11-year-old, okay?)

I figured since I wasn’t really paying for the novel it wasn’t a loss if I didn’t like it. I was pretty certain, however, that chess book was going to come in handy…

Well, I never did read the chess book (ah, my career as the first Canadian Grandmaster that might have been) but did get into The Eye of the World one night when I was having trouble getting to sleep.

I read the first five chapters before I looked up and noticed it was 3am (on a school night!) But I was there with Rand and Tam, cold and out of breath, running terrified through the Westwood when the Trollocs and Myrddraal attacked on Winternight. I’d rarely ever been so transported by fiction (maybe by The Hobbit and LOTR, and maybe by Kevin J. Anderson’s Gamearth Trilogy).

Though I fell out of reading the series later when there started to be years between novels, it’s hard to overestimate how the first four or five books in the Wheel of Time consumed me between the ages of 12 to about 17. I recall that a copy of The Great Hunt was all I wanted or asked for when I turned 12–it came out 2 days after my birthday and those two days were excruciatingly long.

So thank-you, Mr. Jordan, for my Golden Age. My only hope is that somewhere, someday, in my own writing, I might channel even just a hint of that magic–that True Source–you wielded so deftly. I, along with many others I’m sure, will miss you.