Wednesday was simultaneously one of the longest and shortest days of my life.

In bed at 130am, I was up at 5 am when Doug’s cell phone alarm went off. We’d agreed we’d get an early start and I actually found I wasn’t that tired (my body always does pretty well with the three hour time difference in California—it tricks my body into thinking it doesn’t need as much sleep. I always feel like I can get so much more done in a day in Cali…)

The next hour or so was spent writing, then Doug and I went off to breakfast. Well aware that there wouldn’t be time for lunch today (even breakfast was a bit of a luxury—we should have spent that time writing!) we got the buffet and ate our $20 each worth.

Then back to the room for the completion of our marathon.

There’s not that much to report in terms of events for the next eight or so hours—Doug and I basically sat in our room (me in the armchair, him on his bed) writing as fast as we could.

Doug was definitely the faster—speedwise he out wrote me 2:1 and was actually done his story around 2pm, giving him time to revise. But Doug was a great roommate the whole week and was a good guy to be cooped up with for a whole day writing.

The only breaks came when I went to get ice (for the Dr. Pepper, which along with the tortillas and salsa I’d bought on Monday, sustained me until nearly 10pm that night), and when (guess who?) Hugette came by to get some “action shots” of us writing. 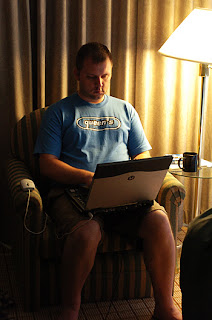 Here’s my action shot. It’s actually 2pm and bright
and sunny out, but because I was sitting in front of the
window we needed to draw the blinds…
(photo courtesy of WOTF/Galaxy Press)

I also popped down the hall for a bit to see how Tony was doing. He and his roommate John (who’d MacGyvered himself a writing desk out of a collapsible laundry stand and a towel) were working feverishly, and Tony was not only confident in his ability to finish in time, but had in fact broken the story into thirds and was budgeting time to work on and complete each section. Needless to say, I (who was worried I’d be the first-ever WOTF participant not to finish the 24-hour story) was impressed (and a little intimidated) by this kind of scheduling. I was also envious of Tony and John’s balcony!

Tony and I stepped out for 5 minutes on a Starbucks run. While I don’t drink coffee, Tony has an uncanny ability to sense how far he is (in meters) from the nearest Starbucks. While most humans are 70% water, Tony is actually 70% iced decaf triple grande five pump soy no whip Mocha…

It turned out that Pasadena was the place to be in California that week. In addition to the Writers of the Future awards and the Miss Teen USA competition, they were filming part of an episode of Heroes down the street from the Starbucks. Ah! I loved the first season of Heroes and it would have been fun to go lurk around the set and maybe catch a glimpse of one of the principles…

But, instead, it was back to the room and back to work.

I kept pounding out the words all afternoon. Tony and John stopped by later for about five minutes to check on Doug and I but otherwise it was a mad dash to the finish for me while the hours rushed past. As I said, this was one of the shortest longest days I’ve ever experienced.

Writing until 545pm (with a 6pm deadline) I managed to finish a draft and ran to the business center to print. I bumped into Andrea and British Steve doing likewise. After Andrea worked some magic with the USB interface on the hotel computer (I think being yelled at to work in that New York accent of Andrea’s was the computer’s cue to do whatever she said if it valued its continued computing existence…) we three had printed off our tales and handed them in on time.

I have to say, we all looked a little rough for the experience but I think it was universally enjoyed. We looked forward to some dinner and then to bed…

Despite our collective hollow, zombified gaze, we were to have more class. Okay–Tim and Kathy want to talk revision with us. That makes sense; I know my story will need some major work to get it into shape (but I was happy with the basic story, which was surprising after only 24 hours with it…)

“If your first draft isn’t stupid there’s something wrong with you.”
– Tim Powers

And their thoughts were really interesting and engaging–which shows you how good Tim and Kathy are, given how tired I was. I think Tim and I seem to work in a similar fashion during revision, but hearing how Kathy works (which is a bit different) was really intriguing–I like a variety of perspectives so I can maybe try new things myself.

This is the point at which I realized where I’d stopped working, thinking that the story was “done”, is where the really hard, important work on a story should start. This is something that I know I’ll have in my mind ever after when I’m revising, and one of the (many) insights from the week that I’ll always to grateful to Tim and Kathy for helping me realize.

But class didn’t end there!

Then the Galaxy Press folks spoke to us about promotion, book signings, and doing media.

First, to impress us, they brought in about six file boxes full of old pulp magazines in plastic sleeves. They laid these amazing magazines out (had to be a hundred or more) over all the tables and let us look at them for a while. They were all the magazines that L. Ron Hubbard had published in (his story was often the cover story) either under his own name or one of his numerous pseudonyms. But his wasn’t the only recognizable name: Heinlein, Van Vogt, Sturgeon, Poul Anderson, Asimov…the list went on. 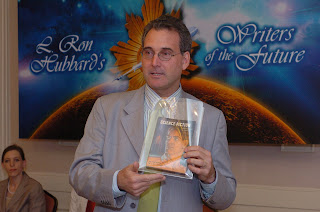 John Goodwin with a copy of Astounding Science Fiction from February 1950. This blows my mind–my father would have been three months old, and my mom wasn’t even born yet.
(photo courtesy of WOTF/Galaxy Press) 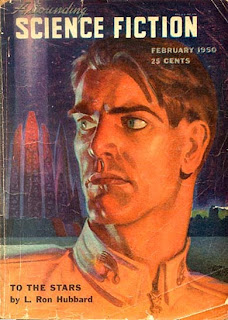 Here’s a close-up of the same magazine
John is holding–this one isn’t in nearly as good
shape, though.

Many of the pulps were in fabulous, near-pristine condition and a rough estimate was that there was more than $100 000 dollars worth of pulps in that room.

To see and hold these relics of the Golden Age was an amazing experience. Some of the covers were pretty garish, but there were so many colorful, interesting, and exciting ones…I think if SF magazines had some of these covers today (okay, maybe not the ones with space robots kidnapping topless young women) they’d sell more copies on the newsstand.

Next, Kim Catalano from Galaxy Press spoke to us about how to set up book signings, in-store promotion, and the press kit that we’d be sent once we were home. 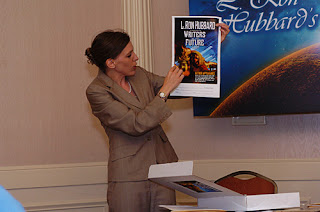 Here’s Kim with one of last year’s posters. Posters of our
cover would be included with our press kits.
(photo courtesy of WOTF/Galaxy Press)

Peter Breyer followed to talk to us about blogging and driving traffic to your site via keywords, content distribution, and ‘pinging’. 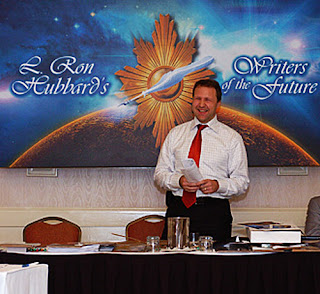 Peter Breyer gave a talk on blogging–this ping’s for you!
(photo courtesy of WOTF/Galaxy Press)

And finally, John Goodwin spoke to us about doing media and press, which included us doing fake interviews with our twin (this came in handy almost immediately, as Tony and I were both interviewed two days later by the Adventures in Scifi Publishing podcast).

At 930pm (fourteen hours and counting…) we were mercifully released for the evening, having been given the three stories–Andrea’s, Joe’s, and Tony’s–we were to read for the critique session the next day.

Tuxes had arrived and Sarah was handing them out. Mine was great except the jacket was a size too large (the tailor had guessed my size and had guess a bit big) but Sarah assured me they’d have a new one for me the next day.

After that I joined Andrea, Kim, and Damon for dinner at PF Chang’s. We were joined by past WOTF winners Eric James Stone (WOTF 21) and Steven Savile (WOTF 19), along with Steve’s girlfriend (who is also an author) Alethea Kontis. While dinner wasn’t that great, the company certainly was as Eric and Steve (soon known as ‘Swedish Steve’–for while he’s British he now lives in Sweden…and we already had a British Steve) regaled us with tales of WOTF weeks past, and offered their advice to we new winners. I actually feel really lucky that I got this time to talk to Steve as we got on well and because his actual presentation to us the next day (on much the same topic) was cut a bit short due to scheduling problems.

On the way back to the hotel, Kim pointed out (jokingly) how she didn’t like a “wicked Canadian” in the running to “steal our American trophies.” I challenged her to a game of hockey to decide the matter. She thought she had the upper hand, pointing out that an American team (the Anaheim Ducks) had won the Stanley Cup this year…until I pointed out that most of the players on the Ducks (and on most NHL teams) are, in fact, Canadians…and that most of the rest are Europeans, with only a “token” American or two playing.

We got back to the hotel at 1130pm (sixteen hours and counting…) and it was time to read the stories…but I decided that had better wait until the next morning when, after several hours of sleep, I might manage to say something intelligent.

Comments Off on Writers of the Future Award Week: Day Four (Wednesday, August 22, 2007)