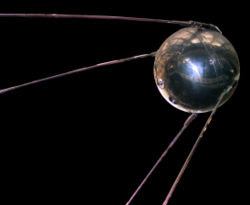 It’s spherical but quite pointy in parts…

Ah, the little probe that scared the pants off the Americans and started the Space Race turns 50 today. What a bright, shiny, chrome-plated future Sputnik represented. Assuming mankind didn’t opt for self-induced atomic holocaust, we were all supposed to drive flying cars by now, eat entire meals in pill form, and vacation in Stanford torus orbital hotels.

Well, we avoided the atomics (for now) but alas no flying cars or orbital vacations.

We do have TiVo, though, so humanity has made some progress. And just think of all the clever words Sputnik gave rise to–Beatnik, Peacenik, Picnic (well, maybe not that last one…)

There’s a nice article about Sputnik over at the New York Times.

For some sounds of Sputnik (and other early satellites) go here.

Comments Off on Sputnik Turns 50