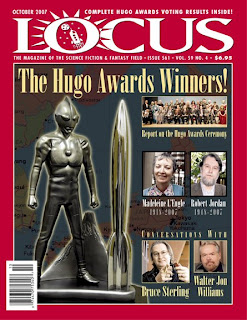 The October issue of LOCUS, the SF/F book trade magazine, is available now and features an article about the Writers of the Future Award Ceremony, including the Life Time Achievement Award presented to Charles N. Brown, Publisher and Editor-in-Chief of LOCUS.

I’m mentioned a couple of times in the article–my first-ever mention in LOCUS! I’m kinda excited. However, I could quibble with their choice of photo for Lorraine and me…My recollection was that all the other photos were done and Lorraine asked someone to take this gag shot with her camera.

Apparently somebody else was still taking pictures at the time… Sigh. 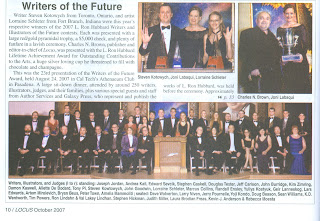 The anthology also has a write-up amongst the late September New Books received by LOCUS.

Comments Off on I’m in LOCUS!