‘Stephen Won the Writers of the Future!’ Party

So the weekend before Thanksgiving, Karen Danylak (from my writer’s group) was kind enough to throw me a party in congratulations for my Grand Prize win at the Writers of the Future. We all trekked out to her and husband Aaron’s new house in Pickering and a good time was had by all. But as I just got the photos now (there having been some confusion about where the USB cable for the camera was) I’ve waited to post until now: 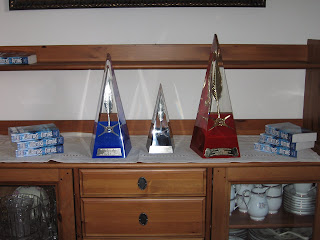 Tony and I set up our trophies on the buffet–a complete set! 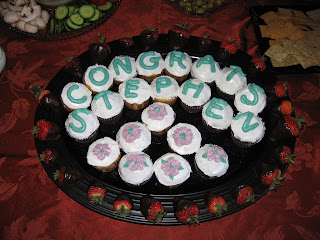 There was a great spread of food provided by Karen,
including these congratulatory cupcakes.
Besides Karen, in attendance were many of the friends I’ve made over the last few years in the Toronto SF writer community, including: Tony Pi (fellow WOTF winner), Mike McPherson (from the Fledglings and award-winning author in his own right…write?), Suzanne Church (who regaled us with tales of interviewing Jamie Bamber at DragonCon), Arlene and Brad Carson (also of Fledglings fame, and who brought champagne!), Ian and Jane Ann McLachlin and their daughter Amanda (again, Fledglings), as well as Jana Paniccia (my editor from Under Cover of Darkness), and Nebula Award Nominee Karina Sumner-Smith (who we spent most of the evening convincing to go to World Fantasy in November–she eventually relented and is going to come). 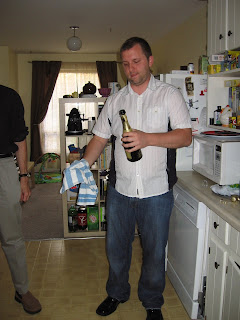 Opening the champagne Brad and Arlene brought. In proof that all those
years I worked at the LCBO weren’t wasted, I opened the champagne properly—
without popping the cork and shattering a window and without spilling a drop.

Later in the evening, Rob Sawyer and his Wife Caroline Clink arrived fresh from Dawson City, Yukon! They’d been back in town less than 24 hours and had to be up early the next morning to attend Toronto’s annual Word on the Street festival. It meant a great deal to me that they were able to come, as without Rob I never would have been part of the Fledglings and might never have even entered, let alone won, the Writers of the Future. 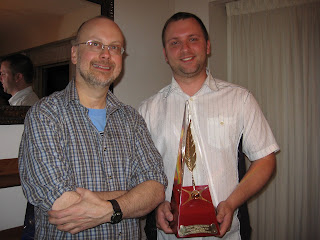 Rob, and me, and the bling. Sadly Tony had to leave early–
it would have been nice to get a photo with the three of us.

And around 9pm who should show up be James Alan Gardner, great writer and all-around good guy, and fellow WOTF Grand Prize Winner (he won in 1989). As only the second Canadian Grand Prize winner I feel very fortunate to be in Jim’s company. And to show you what kind of a classy guy Jim is he ducked out of a wedding in which he was best man in order to come! He said he couldn’t miss the party. What a guy. Foolishly, however, I forgot to get a photo with him, too. 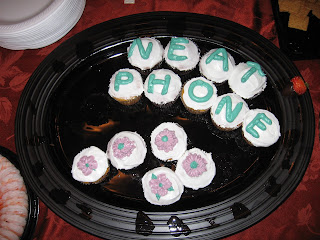 Later in the evening we started seeing how many words we could make from the remaining cupcakes. Eventually we got down to APE ONE (which sounds like some weird spaceship that Richard Branson is funding…) Yes, this is how writers entertain themselves at parties.

We watched (on Aaron’s gorgeous widescreen LCD TV) the DVD of the award ceremony and speeches that Galaxy Press had provided. Tony had insisted I bring it and I only agreed because he gets so uncomfortable watching himself 🙂 People seemed to get a kick out of reading my lips when they announced my name…I can’t imagine why.

All in all it was a fabulous evening and I’m very grateful (and very touched) that Karen did so much to organize it for me.

8 Responses to ‘Stephen Won the Writers of the Future!’ Party