Off to See the Wizard

Tony Pi, Mike Rimar, Sarah Totton, and myself were all in attendance for our WOTF instructor/guru Tim Power’s talk this weekend at the Merrill Collection of Science Fiction, Speculation and Fantasy.

Rather than a how-to-write talk, Tim’s presentation was one of the most compelling arguments I’ve ever heard as to the relevance and merits of reading and writing fantasy fiction.

In the audience were a number of Eng lit students (including one professor) who quizzed Tim afterward about fantasy’s relationship to allegory, magical realism, etc. Tim, himself an English lit student, had some interesting thoughts.

This got me wondering whether any one would ever ask such questions of science fiction…I decided probably not, mostly because I fear I’d never be able to handle myself in a similar situation as deftly as Tim. I assume questions I’ll be asked will be mostly of the “Do you know all the science in your story is wrong?” variety… 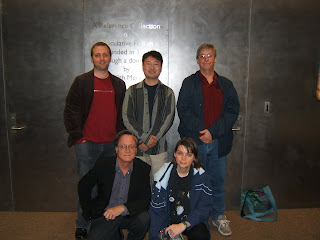 Here’s all of us. Not exactly sure why Tim–the Guest of Honour–is the one crouching down front. He insisted. We’ve been trying to come up with a name for the four Toronto-area WOTF winners. Mike offered The Gang of Four (which I liked), but Sarah’s suggestion of The Usual Suspects could sway me, so long as I get to be Fenster.
Photo courtesy of Sarah Totton

Mike has a nice write up (and more pictures) on his blog here.

8 Responses to Off to See the Wizard