LOCUS Review of Writers of the Future XXIII 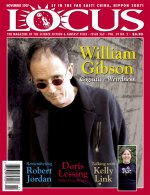 I’m back from a fabulous weekend at the World Fantasy Convention and a fun television interview yesterday morning in Kitchener. But no rest for the wicked–I’m off to do a signing at the World’s Biggest Bookstore in a couple of hours.

It’s fun to feel a bit like a rock star 🙂

Wanted to let you all know that while I was gone LOCUS, which is THE trade magazine of the SF publishing industry, came out with its review of Writers of the Future XXIII in the November issue. The reviewer, Rich Horton, mentioned a number of stories as “highlights”, including tales by Andrea Kail, Jeff Carlson, my fellow Toronto winner (and evil twin) Tony Pi, and yours truly.

Of my story, Horton said:

Another gloriously wild idea is at the center of Stephen Kotowych’s “Saturn in G Minor”: a great composer wants his final piece to be played using Saturn’s rings as the instrument…I was pleased by the audacity of the whole thing.

Coming up this week I plan to make a big push and finally finish my Writers of the Future diary (Friday and Saturday/Sunday still to come). It’s taken me a lot longer than I’d hoped it would, but I want to do it right. I found the diaries of previous winners really helpful when trying to figure out what to expect of the week and my hope is that some future winner–perhaps YOU–will find mine similarly helpful. So thanks for your patience as I blog for posterity 🙂

Also, I’ll blog more about my TV interview, the World’s Biggest Bookstore signing, and World Fantasy. Then I should be all caught up.

PS: I was tempted to entitle this post “Horton Hears a WOTF” but wasn’t sure what the search engines would make of it if I did…

Comments Off on LOCUS Review of Writers of the Future XXIII