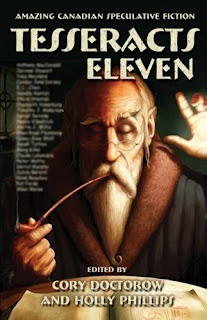 Well, since I’ve seen Tesseracts Eleven at both the World’s Biggest Bookstore and at the Fitzhenry & Whiteside table at World Fantasy, I’m officially going to declare Tesseracts Eleven (which includes my new story “Citius, Altius, Fortius”) available, even though Amazon says it’s not out until November 19.

So go get your copy now!

I’m pleased with “Citius, Altius, Fortius” for a number of reasons, not least of all because it sees print in advance of the 2008 Beijing Olympics. The upcoming Olympics are the first at which, some believe, gene doping (a theme of the story) will be employed in athletes’ quest to be faster, higher, stronger.

It’s also a kick because several corporations that appear in the story–pharmaceutical and biotech company Santamondo, the Swedish conglomerate Spärra, and the Chinese aerospace giant Shenzhou Corp–are all companies which have appeared in unpublished stories of mine (including the very first story I ever submitted to the Fledglings back in 2003). I find myself strangely attached to these imaginary companies, which is why I guess I keep reusing them, so it’s nice to have them take on some aspect of the real by finding their way into print. I have no doubt that they’ll feature again in my fiction, and hopefully as my publication credits mount these corporations will help my work take on a kind of verisimilitude.

Any way, enjoy the story! I’ll be posting later this month about the details for the launch at Bakka.