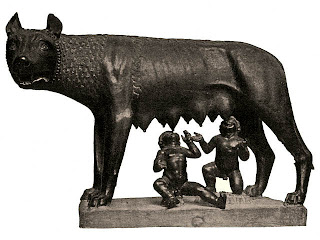 Fascinating news from Rome, where archaeologists have unearthed an underground grotto revered by ancient Romans as the place where a she-wolf nursed the city’s legendary founder, Romulus, and his twin brother Remus.

Decorated with seashells and coloured marble, the vaulted sanctuary–known as the Lupercale (Latin for ‘Cave of the She-Wolf’)–is buried almost 16 metres inside the Palatine hill. The Palatine was the centre of power in imperial Rome on which was built the palace of Augustus, Rome’s first emperor, who was said to have restored and decorated the cave.

Fearing the ancient chamber might collapse, archaeologists used endoscopes and laser scanners to study it and navigate to these guys for more information about it, and measuring the circular structure at 8m (26ft) in height and 7.5m (24ft) in diameter.

There’s now debate about how best to gain access to the Lupercale. Some are looking to strart a new dig to find the grotto’s original entrance at the bottom of the hill, while others suggest enlarging the hole at the top through which probes have been lowered so far, for fear that burrowing at the base of the hill could disturb the foundations of other ruins.

The Palatine is honeycombed with palaces and other ancient monuments, from the eighth-century-BC remains of Rome’s first fledgling huts to a medieval fortress and Renaissance villas. But the remains are fragile and plagued by collapses, leaving more than half of the hill, including Augustus’s palace, closed to the public.

Stuff like this (you may have surmised) fascinates me.

It’s amazing for me to think of what history might lie buried beneath our feet. In my part of the world (Toronto) there’s probably not that much. Toronto is a young city (or Yonge city–sorry) and the various First Nations who lived in these parts before contact with Europeans never built grand monuments of stone that would last for ages (unlike the Aztec, Maya, or Inca of Central and South America). The history that we build over is, for the most part, recent–500 years or so–compared to the Old World.

What also fascinates me is how cultures or traditions build (and sometime co-opt) places of meaning and power to add weight and meaning to their own existence. I think there’s some very deep need in human beings to stretch themselves (and their legitimacy) either backward in time to the Beginning or to attach it to some greater power.

While not exactly the same, for centuries British monarchs took their coronation oath on a throne which contained the Scottish Stone of Scone (the so-called Stone of Destiny), used in the coronation of every Scottish king since 847 AD, and which is supposedly the pillow stone used by the Biblical Jacob.

See what I mean?

I wonder what Augustus would have thought of endoscopes and laser scanners being used to fish answers from the small cave he had decorated and over which he built his palace after it was forgotten for nearly 2000 years.

He’d probably like it–doubtless it would flatter his vanity. For while Rome fell, he would no doubt enjoy that he (and his deeds) were remembered for millennia.

And, as a side note, further proof that the Romans knew how to party:

In Roman times a popular festival called the Lupercalia was held annually on 15 February.

Young noblemen called Luperci, ran from the Lupercale around the bounds of the Palatine in what is believed to have been a purification ritual.

Naked, except for the skins of goats that had been sacrificed that day, they would strike women they met on the hands with strips of sacrificial goatskin to promote fertility.

Comments Off on Romulus: Not Just for Star Trek Fans Anymore