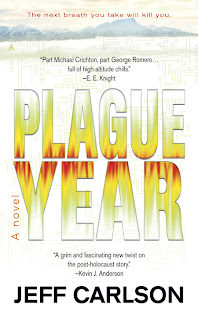 A big congratulations today to my Writers of the Future buddy Jeff Carlson, who has just sold German rights for his book Plague Year and its two sequels to publisher Piper via the Donald Maass Literary Agency.

The book was sold in a best bid auction, for what Jeff assures me was a “significant deal” in high five figures. Included in the contract are bestseller bonuses, which, if attained, will make the overall deal worth six figures, plus royalties.

Piper intends to publish the first volume in September 2008 as “part of a special marketing campaign aiming to link phantastic and mainstream novels in order to widen the range for ‘phantastic thrillers’ in both the mainstream and the science fiction/fantasy market,” including advertising, special pages in Piper catalogues, and cross-promotion in genre and non-genre media.

Spanish rights for Plague Year were also sold to Minotauro in a preemptive bid over Plaza / RHM.

Jeff won First Place in the first quarter of last year’s Writers of the Future contest and somehow found time to get his first novel published between then and attending the workshop and awards week this past August. Plague Year has one of the best blurb quotes I’ve ever read on the front cover: “Part Michael Crichton, part George Romero…full of high-altitude chills. – EE Knight”. Cool, right?

The first sequel, Plague War, is slated for release in North America in August 2008, with the next title set to follow in Summer 2009.

All of us WOTFists from this year are thrilled for Jeff. And, as Jeff has so kindly decided to include many of us as minor characters/cannon fodder in Plague War, it means that yours truly will now get to die an exotic death in at least three different languages. w00t! 🙂