Ladies and Gentlemen: this is SPECTRE No. 5

That recent Russian elections appear to have been fixed, that Vladimir Putin–barred from seeking a third consecutive term as President of the Russian Federation, yet still determined to wield power after he leaves office–yesterday named his crony Dmitry Medvedev as his preferred successor, that this apparently all but ensures Medvedev will be anointed Russia’s next president, and that he’s played his part as political stooge properly by announcing today that (surprise, surprise) Putin will be appointed the next Prime Minister under President Medvedev–doesn’t concern me as much as the fact that no one seems to care.

Russia is a nuclear power with great power instincts and ambition; it has tremendous energy resources, a resurgent economy and an increasingly active military. It is making its voice heard on the international stage, on issues as diverse as Iran, Arctic sovereignty–remember that flag capsule they planted to claim the North Pole for Mother Russia?–and military exercises with China.

Why are we in the West less concerned about what’s going on in the former Soviet Union than we are about Linday Lohan’s bar tab?

I hate that I know this, by the way, but that’s my point–even if you don’t care, it’s impossible these days NOT to know. When “real” media outlets like ABC, CBS, and CNN are covering this crap and not letting it remain rightly the purview of Entertainment Tonight, it’s impossible for someone like me–who doesn’t give a rat’s ass about Lindsay Lohan’s stupidity and misbehavior–not to be exposed to such trivialities.

That the notion of peacefully replacing leaders through a free and legitimate democratic process has not yet taken hold in the former USSR should be an issue of concern for Canada, the United States, Europe, Asia, etc. etc. etc.

That the current president of Russia is a former KBG agent who apparently sees targeted assassinations of opponents and critics like Alexander Litvinenko (by use of radioactive polonium-210–doesn’t get much more Bond villain-esque than that) and journalist Anna Politkovskaya–as a legitmate means of getting things done in a “democracy”, and that the Russian people–accustomed to the ‘strong man’ in Russian politics since the days of Ivan the Terrible–should like it this way should have people very deeply worried.

I was watching From Russia With Love again the other day, and it struck me how much Putin resembles the chess grandmaster/SPECTRE tactician Kronsteen–Number 5, as he’s better known in the SPECTRE hierarchy. 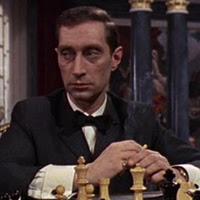 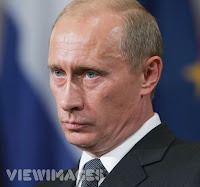 Now, I think physical resemblance is where the comparison ends. Kronsteen, after all, sees his plan fail and is killed in the second act via poisoned boot knife as the price for failing SPECTRE. Putin, given that his plan is succeeding nicely, is much more like SPECTRE’s criminal mastermind and Number 1, Ernst Stavro Blofeld.

Comments Off on Ladies and Gentlemen: this is SPECTRE No. 5