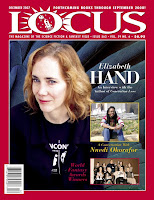 The first issue of my new LOCUS subscription (the December 2007 issue) arrived yesterday and includes a review of Tesseracts Eleven by Rich Horton, the same reviewer who recently reviewed Writers of the Future XXIII for LOCUS.

He calls Tesseracts Eleven as a whole “one of the stronger entries” in the Tesseracts series and “a very solid anthology, full of enjoyable and thoughtful stories.”

Of my story he says, in part:

“The most straightforward SF is “Citius, Altius, Fortius”, by Stephen Kotowych, about a failed sprinter with some talent who is lured to a fictional African country for a radical program of bodily alteration that makes him an Olympic champion…(A) solid look at an athlete’s obsession.”

Comments Off on LOCUS Review of Tesseracts Eleven