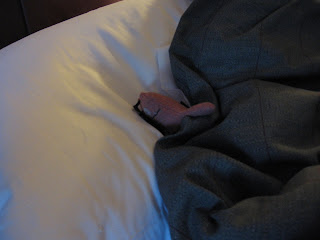 Poor Wage–he has the boozing capacity of one of the brownies from Willow. After his bender the night before in the hotel bar he’s seen here recovering. Poor little guy didn’t fell well enough to enjoy the rest of the week and mostly stayed in bed.

Damon Kaswell, John Burridge, my roomie Doug Texter, and I were all in the hotel exercise room before 7am Monday morning. Clearly a new breed of SF writer was at hand–let’s see Asimov, Bradbury, Clarke, or Ellison run 5 miles first thing Monday morning.

(One could point out that they’re too busy writing best sellers to have time to run 5 miles…and one would be right in doing so. And you can also note that this was the only morning I managed such a feat…)

It was at this point that I began to realize we were not in just any hotel. One by one, in came blond British girl after blond British girl. Then I put it together: the flight crews in slightly retro uniforms we’d seen the night before in the lobby…these British girls coming to workout…Ah hah! This was the lay-over hotel for Virgin Atlantic crews! Every other day a new crew arrived either from Heathrow or Sydney on their global circumnavigation in service of Sir Richard Branson.

Whenever you went out to the pool the rest of the week there were invariably Virgin flight crew (men and women) clogging every deckchair, their sun-worship done with a kind of reckless abandon given the grayness of their native land. (British Steve would later complain that there are no more good looking women in England because they are all Virgin Airways stewardesses and constantly out of country…)

After getting ready for the day, next was breakfast downstairs in the hotel restaurant (*cough*robbery*cough*). Though we’d discovered a rather large supermarket at the mall the night before, I didn’t want to risk missing the start of the meetings.

I saw KD Wentworth having breakfast over in the corner and briefly thought about joining her but chickened out. Soon I was joined by fellow winners John Burridge and Damon Kaswell, the two winners from the Wordos–the Eugene, Oregon writer’s group that is some kind of advanced training program for winning the WOTF (past winners from the Wordos include Eric M. Witchey, Leon J. West, and Jay Lake)–Steven Gaskell from Brighton, England (who was quickly rechristened ‘British Steve’); and Ed Sevcik, gentle giant of our group, who’d just recently moved to Haifa, Israel.

“Spy thriller fans will be very happy up until the first genie appears.”
– Tim Powers

We all spent too much on breakfast (especially John, who had a cup of tea and one of those little boxes of Raisin Bran from the Kellogg’s variety pack for $14) and when the waiter, who was from Thailand, came to clear away our plates (some of which weren’t polished clean) he regaled us with the traditional weight-loss method of his homeland–which consisted mainly of a diet of butter, steamed vegetables, and going a week without eating now and again.

It was getting near 9am by the time we managed to extricate ourselves (though I was wondering if that could count as our interview of a stranger) and made our way to the little octagonal conference room where we’d spend our workshop hours. 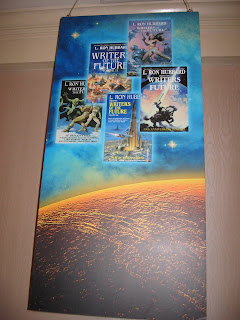 From the front of the room. Left panel… 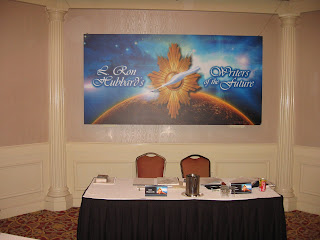 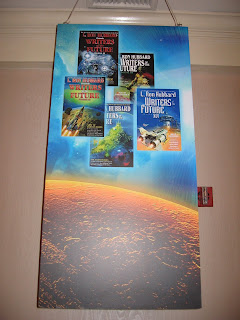 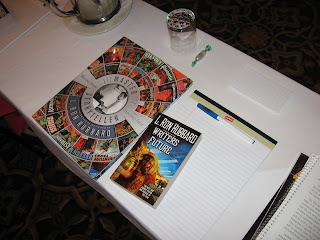 How our desk spaces were laid out: ice water (with lemon), a mint, notepad, pen, a copy of The Master Storyteller (a book of Hubbard’s pulp magazine covers, some of which were really cool), and a copy of WOTF XXII (which included Joseph Jordan’s story “At the Gate of God,” which Publisher’s Weekly called an “excellent story of faith lost and found.” Joe couldn’t make it to last year’s workshop so we were lucky enough to have his company for our week.) 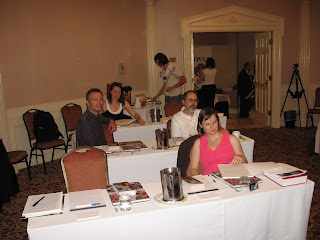 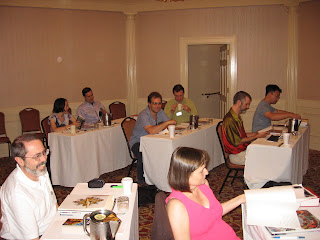 The Whole Gang Part 2: (Somehow Kim and Joe made it in to the photo again…)
From L to R: Aliette de Bodard and Ed Sevcik, Doug Texter and Damon Kaswell, John Burridge and Tony Pi.

The bulk of our workshop lectures and discussions were held Monday. We’d have other sessions Tuesday, Wednesday, and Thursday but they were always interspersed with other events or guest lectures. So Monday was the major (to borrow a term) info-dump day. 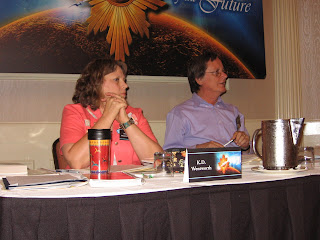 KD Wentworth and Tim Powers–our gurus for the week.

And what an info-dump it was. I took 15 pages of notes and it was all gold. I won’t go into extensive detail about what was said (partially because I don’t think it’s mine to tell–it is Tim and Kathy’s presentation after all–and because such a summary is available elsewhere on the net). 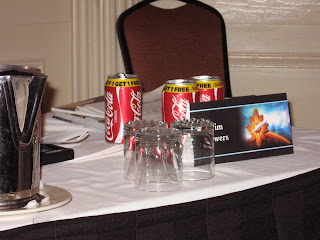 By 11am Monday, Tim had demonstrated that the “lethal dosage” levels of caffeine were more a suggestion that a hard-and-fast rule…

In general, however, some of the things I learned:

– Where I had been stopping work on stories thinking they were done is the point at which the real work on them needs to begin
– The story is not the words
– Leave out the bits readers skip over
– Ask questions of your characters and plot (Why? But why really?) but also ask random questions (How is this like cutting down a tree?) to see what information they might throw up for you to use
– If you as the author know something completely you can leave it out and the reader will be able to figure it out
– Dialog can be too helpful. Chop it up, have people mishear or misunderstand. Speech starts and stops; thoughts and words are broken.
– Hiring an agent who is less than the perfect fit for you is like hiring “a blind Sherpa on Everest.” 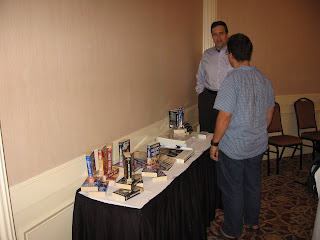 On break Ed and Doug check out the table of past WOTF volumes. By week’s end this table was stripped bare as if by locusts. 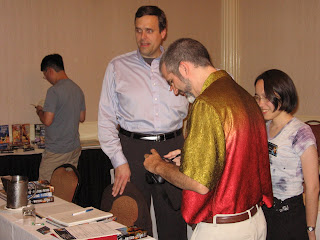 John with camera difficulties as Ed and Aliette look on. In the background, Tony steals his first book… 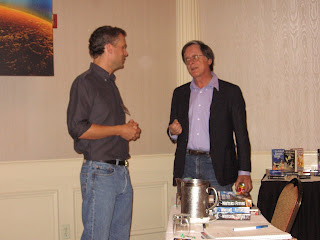 Advice from Tim and Kathy was interspersed with reading Hubbard’s articles about art, writing, plot, suspense, etc. and discussing these with our twin.

“The reason you write is to show off.”
– Tim Powers

Our twin was the person who we were sat beside the first day and with whom we were to discuss the articles and later our story idea. I was paired with Tony (I guess they wanted to keep the Canadians together, lest we frighten the Yankees with our “a-boots”, “ehs?”, and our drinking Labatt 50 from stubbies). Tony was a great partner, later bailing me out of a major dead end with my story. I don’t know that I was as helpful to him as he was to me. He seemed to have a much better sense of his story from the get-go. 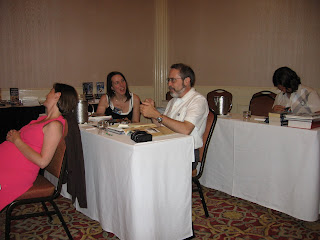 On a break, Kim takes it easy. Joe demonstrates a traditional Bosnian chair samba, much to Andrea’s amusement. Meanwhile, British Steve is fascinated by his name tag–a cutting-edge American technology yet to be exported to Old Blighty.

Though the language in Hubbard’s articles was a bit old fashioned and a bit ‘purple’, as they say, on the whole his advice was solid and got me thinking about things like suspense and character development in ways that I’d not previously thought of them–so all in all quite useful. 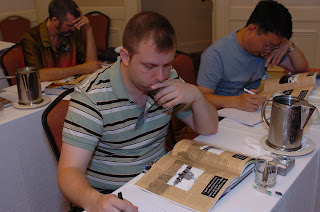 Intently reading, my twin by my side…
(photo courtesy of WOTF/Galaxy Press)

We broke for lunch at the grocery store we’d found the day before and I took the opportunity to stock up on snacks for what I knew would be the Wednesday writing marathon–tortilla chips, salsa, and a 2L bottle of Dr. Pepper.

After lunch I went briefly to my room to drop off my supplies and discovered that someone from Galaxy Press had been in to drop off a WOTF t-shirt. 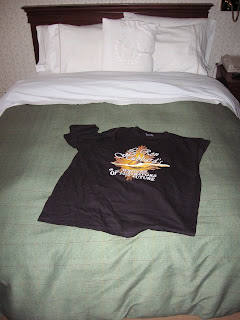 Then back to class for the afternoon. 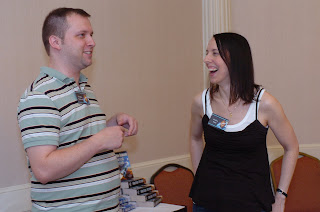 On a break, I appear to be doing some kind of Dr. Evil
impression, much to Andrea’s amusement…
(photo courtesy of WOTF/Galaxy Press)

By the end of the day I’d forgotten that this was only Monday–we’d taken in so much and as I could feel my thinking and approach to writing changing as I listened part of me was sure we’d been there learning for several days already. In a good way, though 🙂

The last thing we did Monday was receive our inspirational item from Kathy. She, quite wisely, had decided on all new inspirational items for this year given that all the old standard ones have been revealed and discussed on the internet. 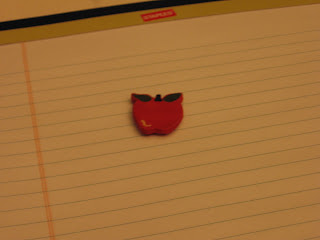 I must confess I was initially a little freaked out because everyone around me seemed to have instant flashes of inspiration from their object and, well, I didn’t. I looked at it for a while and considered it’s various features, hoping for that flash–it was red, wood, had a shine mark that looked like an ‘L’. It still wasn’t doing anything for me. Tony and I talked a bit about it and then class was dismissed.

“My system of plotting is for someone with no memory and no imagination.”
– Tim Powers I had a great time all week with this gang–they’re a very smart, very sharp, very funny bunch. We spent about 20 minutes discussing the semiotic implications of the near-by movie poster for Shoot ’em Up…and by ‘semiotic implications’ I mean Monica Bellucci’s corset, how none of us could take Paul Giamatti seriously as a hitman (Kim wondered if he’d gone over to the dark side after someone made him drink some @#$%ing merlot), and what exactly he was holding. 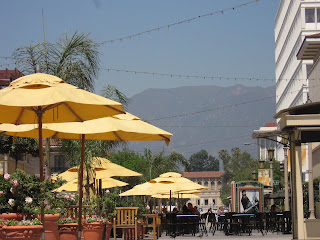 You can see the poster in question in this shot from earlier in the day. 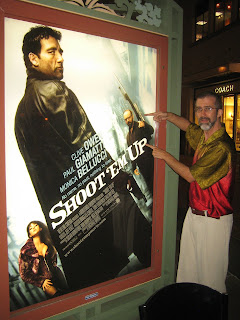 What is that in his hand?
(Photo courtesy of Jeff Carlson)

I think SF writers are kind of a self-selecting group and so we were bound to have much in common and (probably) have similar personalities, so maybe it’s not surprising that such a good time was had. And two weeks later I do find myself missing the gang.

We wandered the open air mall looking for one of those beer helmets as a gift for Tim. We figured since he drank so much Coke we might as well give him the ability to drink from two cans simultaneously while leaving his hands free. Sadly, we didn’t find the helmet…but we did stumble upon a place called Cold Stone Creamery which has some of the richest ice cream I’ve ever eaten. 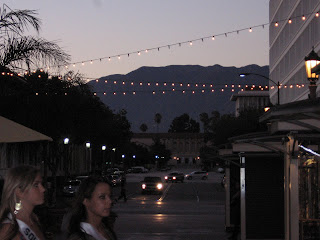 Trying to get a picture of the hills at dusk I instead ended up with two Miss Teen USA contestants wandering into the shot. You thought I was kidding about girls walking around in sashes, didn’t you?

John was able to ascertain the position of Arcturus in the sky and guide us all safely back to the hotel. A few of us went for a quick drink but we were mostly exhausted (and full of ice cream) and retired soon after.

(NB: This is a repost of an article that first appeared on 10 September 2007. You can find my rationale for this repost series here.)