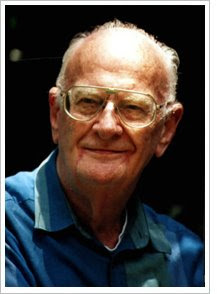 I’ve just learned that Arthur C. Clarke has died. He was 90.

When I was at the Writers of the Future Week last August, I remember talking to Charles Brown about Clarke (a friend of his) and the upcoming tribute to him in the pages of LOCUS. Apparently after the recent Heinlein tribute the magazine did (in honour of what would have been the late author’s 100th birthday) Clarke jokingly asked Charles why he had to wait another ten years to get his tribute…so Charles saw to it that LOCUS did a tribute in honour of Clarke’s 90th birthday in December.

He was truly a giant in the field–besides his 100 books Clarke was, after all, the guy who predicted satellites and came up with the idea of their geosynchronous orbit.

He will be missed by many.

UPDATE (20 March): Just read an interesting appreciation of Clarke and his works in the New York Times. Check it out here.