A million monkeys with a million computer algorithms… 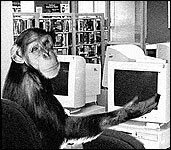 There was an interesting (and slightly terrifying) article from the New York Times today about a man who has “written” 200 000 books.

I was prepared to despair at my lack of having finished writing even a single book until I discovered that this fellow–Philip M. Parker, a professor of management science–has used computer algorithms to trawl the internets collecting publicly available information on a subject–broad or obscure–and then, with the aid of a small army of computers and a few programmers, turned the results into books, many of them in the range of 150 pages and produced as print-on-demand only when a customer buys one. He is the ultimate long-tail retailer.

He’s used these algorithms to automate the (his words) “repetitive tasks” involved in producing a book.

I was prepared to laugh all this off (his customer feedback on the quality of his content sounds pretty negative from the article) until I read that he’s designing new algorithms to generate romance novels. Because, as he points out, there are “only so many body parts.”

My blood ran cold. If one type of fiction, why not others?

This reminds me of a story called “The Word Mill” by Don D’Ammassa that I read in the June 2003 issue of ANALOG. It was one of ANALOG’s short-short stories in the Probability Zero section and was a very funny tale of an author who enlists the aid of a series of artificial intelligences to do all his writing for him (you know–the repetitive bits) in multiple styles and eventually under numerous pseudonyms

Like I said, it was a fun story, I laughed at the end, but I turned the page and never thought it was possible. Even the review on Tangent called the story “amusing but slightly far-fetched.” Famous last words.

Now it turns out that there are actually jerks out there dedicated to such endeavors?

I realize that we’re still a way away from best-selling (or even competently written) AI-authored fiction, but if there’s one thing the history of science fiction has taught me it’s that often just what you think is impossible is the stuff that ends up coming true. And sooner than you think.

At the end of the article the interviewer asks whether any of the acrostic poems Parker has had the computer generate are as good as something Shakespeare would have written.

“No,” he answers. “Only because I haven’t done sonnets yet.”

I’m glad that’s the only reason…

Comments Off on A million monkeys with a million computer algorithms…