Basking in the Reflected Glow of an Aurora

Congratulations to Hayden Trenholm, whose story “Like Water in the Desert” won Best Short-Form Work in English. Hayden is a really nice guy and a heck of a competitor. He wrote a great story and definitely deserves an Aurora. And watch out next year when his first novel, Defining Diana (Bundoran Press), will be eligible in the Best Long-Form Work in English category. 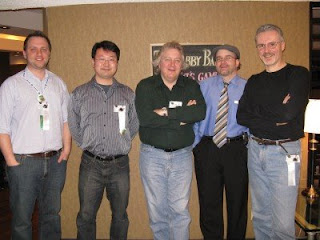 However, I’m thrilled to be associated with an Aurora Award by proxy, because Julie E. Czerneda & Jana Paniccia won the Best Work in English (Other) Aurora for edited Under Cover of Darkness! Yay! Congratulations Julie and Jana! I had my first published story in UCoD and I’m thrilled that they won for their excellent work! A well-deserved accolade!

Best Short-Form Work in English:
“Like Water in the Desert” by Hayden Trenholm (Challenging Destiny)

Best Work in French (Other):
No nominations.

Fan Achievement (Other):
Paul Bobbitt (editor of The Voyageur)

Comments Off on Basking in the Reflected Glow of an Aurora