Meeting of the Grand Prize Winners 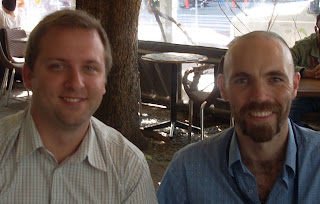 This year’s Writers of the Future Grand Prize Winner, Ian McHugh (that’s him on the right–which, in case you haven’t been paying attention, means that’s me on the left…)

I got a real kick this summer when, shortly before my trip to Australia, it was announced that an Australian, Ian McHugh, had been named the new Writers of the Future Grand Prize Winner.

When I found out that he lived in Canberra (one if its suburbs, anyway), where I planned to be visiting some friends during my trip anyway, well, I thought it would be fun to meet up.

Ian and I had a great lunch talking shop and swapping WOTF stories, which made me want to do the whole award week over again. More and more I’m thinking I’ll have to make the annual pilgrimage to hang out and at least be around that energy. As Sean Williams told me once, he finds it energizing and invigorating every time he goes, which as one of the judges is yearly. So if it doesn’t get old for the judges…

But here’s where Ian and my experience was different: he was much smarter than me (and, I think, than anyone in my cohort).

See, Ian wrote a 1500-word short story for the 24-hour story portion of the week, and was done by 1am the first day. That meant that not only did he get a full night’s sleep, but because he had no other responsibilities the next day he was able to hang out with the judges, go to lunch with Tim Powers and some others…

BRILLIANT! Definite Grand Prize thinking. The time you get with Tim Powers, Kevin Anderson, Rob Sawyer, Sean Williams and all the other judges and past winners (I understand that Eric James Stone and Steve Saville were in attendance again this year) is GOLDEN and just as instructive and fun as all the other stuff that week.

If only I was smarter… 😉

2 Responses to Meeting of the Grand Prize Winners