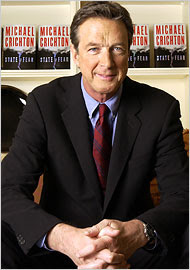 Wow. The death of Michael Crichton comes as quite a surprise. I hadn’t even heard that he was ill.

Oddly, I think I’m more familiar with the movies made from Crichton’s books than with the books themselves. I saw WESTWORLD and THE ANDROMEDA STRAIN movie at a very young age, though I do recall reading JURASSIC PARK long before the movie came out and then reading EATERS OF THE DEAD after I saw the movie version, 13th WARRIOR (which I still love, by the way–both book and movie).

UPDATE: The New York Times now has a full obituary up, plus what they’re calling an ‘appraisal’, titled “Builder of Windup Realms That Thrillingly Run Amok.”

This last piece, well, I’d call it damning with faint praise. It credits Crichton with writing fast-paced, unputdownable techo-thrillers, but in the same breath (and then, at some length) explains how his books relied on “a simple formula”, how the technology was described in his work was “often more subtle and more interesting than his characters,” and–most outrageous of all!–:

“Like most genre fiction, the Crichton novels are windup toys of a sort, and in memory it’s hard sometimes to keep them all straight. We recall them by their themes and issues — the plague book, the gorilla story, the train-robbery one, the airplane thriller — and not for their characters or their fine writing. But they are nevertheless toys that require a fair amount of craftsmanship. Despite their way of latching on excitedly to the latest new thing, they often gleam with old-fashioned polish.”

Now, I’ve heard a number of fellow SF writes disparage Crichton and his works on these same grounds (all the while openly envying his readership and success) but to disparage all of genre…That crosses a line.

Comments Off on Michael Crichton, 66