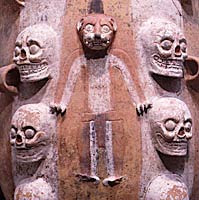 AC/DC eat your hearts out: Mexican archaeologists have found the actual Mayan highway to hell.

Legend says the afterlife for ancient Mayas was a terrifying obstacle course in which the dead had to traverse rivers of blood, and chambers full of sharp knives, bats and jaguars.

Now a Mexican archeologist using long-forgotten testimony from the Spanish Inquisition says a series of caves he has explored may be the place where the Maya actually tried to depict this highway through hell.

The network of underground chambers, roads and temples beneath farmland and jungle on the Yucatan peninsula suggests the Maya fashioned them to mimic the journey to the underworld, or Xibalba, described in ancient mythological texts such as the Popol Vuh.

But the best part? Check out the description of the underworld they found:

“It was the place of fear, the place of cold, the place of danger, of the abyss,” said University of Yucatan archeologist Guillermo de Anda.
…
There, in the stygian darkness, a scene unfolded that was eerily reminiscent of an “Indiana Jones” movie – tottering ancient temple platforms, slippery staircases and tortuous paths that skirted underground lakes littered with Mayan pottery and ancient skulls.

The group explored walled-off sacred chambers that can only be entered by crawling along a floor populated by spiders, scorpions and toads.

Now that would have made a much better movie than Indiana Jones and the Kingdom of the Crystal Skull.

Read the full article here at the Canadian Press site.

Comments Off on Highway to Hell