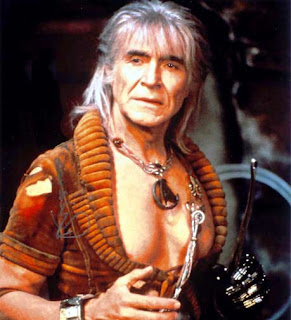 In a continuing rough day for sci-fi TV actors and fans, Ricardo Montalban has died. He was 88.

While the New York Times obit insisted that Montalban was “best known as the faintly mysterious, white-suited Mr. Roarke, who presided over a tropical island resort where visitors fulfilled their lifelong dreams” on the Fantasy Island, I think Bloomberg News was correct in stating:

Montalban was perhaps best known for his portrayal of the character Khan Noonian Singh, a genetically engineered, tyrannical super-human introduced in a 1967 episode of “Star Trek” that ended with the space ship USS Enterprise depositing Khan and his followers on an inhospitable planet. The plotline resumed 15 years later in the movie “Star Trek II: The Wrath of Khan” (1982), with Montalban’s character seeking vengeance.

One of the great regrets I have as a Star Trek fan is that Montalban declined to reprise the Khan role for a planned two-part episode of ST:TNG in which the Enterprise-D and her crew would have encountered Khan in the 24th Century. Apparently, it was all to have been a holodeck battle-drill simulation, but only Picard and Data were to have known, while the rest of the crew was to have believed they were in mortal danger. Could have been interesting but Montalban declined because he suffered back pain his whole life after a fall from a horse in the 1950s and was confined to a wheelchair for sometime before he died. Robert Rodriguez managed to talk him into playing the grandfather in Spy Kids 2 (which was a lot of fun, actually) and even wrote the wheelchair into the script.