But more than that, for my money THE DARK KNIGHT is one of the best films I’ve ever seen PERIOD. Watching it again on DVD put me right back on the emotional roller coaster I was on the first time I saw it on the big screen…and the other three times I saw it on the big screen, too. (The IMAX version was amazing!) Heath Ledger’s performance is simply riveting and is one of the very few film performances that make me want to go back and watch the film over and over for that alone, if for no other reason. In fact, late on Boxing Day night (Boxing Night?) I found myself jumping from Joker scene to Joker scene and ignoring the rest of the also awesome film.

So I’m hoping (perhaps against hope) that THE DARK KNIGHT will be getting some well-deserved Oscar attention when the nominee announcement are made on January 22. I’d like to see a nomination for Ledger, but I don’t know whether he’d fall under Best Actor or Best Supporting Actor. Christopher Nolan should be up for Best Director and THE DARK KNIGHT should be one of the Best Picture nominees if there’s any justice in the world.

I mention all this because today I found some hilarious DARK KNIGHT-related fan art on the web.

Can you imagine this as the “For Your Consideration…” ad for Heath Ledger’s Oscar campaign?: 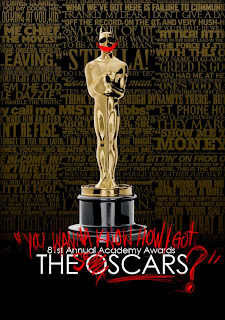 Like I said, that’s fan art. I think Warner Bros should give this guy a truck load of cash and use his inspired poster in official ads.

And the second combines two of my favorite movies into one hilarious trailer (as an aside, I note that both of these movies are that rare creature: a sequel that surpasses the original film):

Comments Off on Oscar Season