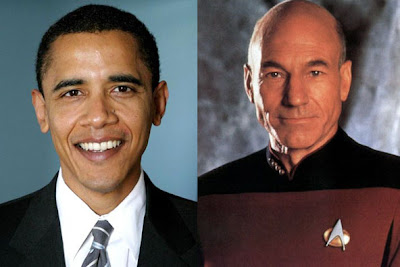 On this, the Inauguration Day of the 44th President of the United States, I know this sounds like weird fanboy-ishness…and, okay, maybe it is. But that doesn’t mean I’m not right!

Admittedly, I was pretty jazzed when Obama won. But listening to the pundits and talking heads over the last few month describe what we can expect Obama’s ‘style’ of leadership to be as the American President, and as we’ve seen his various cabinet picks, I was struck by an odd familiarity…

I’ve repeatedly heard Obama described as someone who welcomes debate and discussion, constructive disagreement and constructive criticism, all options and opinions being brought to the table and welcomed…

These are the same traits I recall being ascribed to someone else: Captain Jean-Luc Picard.

Okay, granted he’s a fictional character, but that doesn’t mean the example is any less valid. Noted Canadian philosopher and academic Mark Kingwell has lectured on Picard as a model leader and bureaucrat, and there have even been books dedicated to unlocking the ‘Picard style’ of leadership.

And what would that style be?

Picard’s whole approach is best summed up in the second season episode, ‘Pen Pals‘, in which Wesley Crusher faces his first command and the problems that ensue. Seeking advice from Riker on ordering around a difficult crewman:

Riker:
In your position it’s important to ask yourself one question: what would Picard do?

Wesley (after thinking a moment):
He’d listen to everyone’s opinion and then make his own decision.