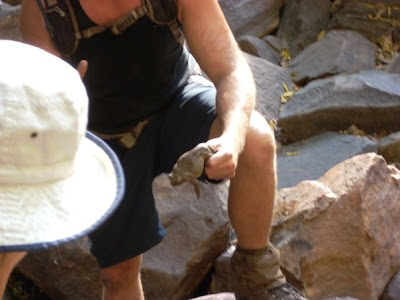 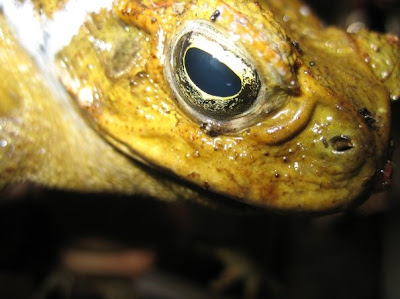 The above photos are of a cane toad caught by our guide in Australia’s Kakadu National Park. He explained to us what an ecological menace they are and then…well, let’s just say this toad had a very bad day after that.

SYDNEY — For decades, the poisonous cane toad has plagued Australians, breeding rapidly, eating voraciously and bestowing death upon most animals that dare try to consume it.

So officials came up with a novel — some say poetic — solution: Hold a festive mass killing of the creatures and turn the corpses into fertilizer for the farmers who have battled the pests for years.

On Saturday, residents of five communities in cane-toad-plagued northern Queensland state will grab their flashlights and fan out into the night to hunt down the hated animals as part of the inaugural “Toad Day Out” celebration. The toads will be brought to collection points the next morning to be weighed and killed, with some of the remains ground into fertilizer for sugarcane farmers at a local waste management plant.

The toads were imported from South America to Queensland in 1935 in a failed attempt to control beetles on sugarcane plantations. The problem? The toads couldn’t jump high enough to eat the beetles, which live on top of cane stalks.

The ample amphibians, which grow up to 20 centimetres in length, bred rapidly, and their millions-strong population now threatens many local species across Australia. They spread diseases, such as salmonella, and produce highly toxic venom from glands in their skin that can kill would-be predators. The toads are also voracious eaters, chomping up insects, frogs, small reptiles and mammals — even birds. Cane toads are only harmful to humans if their poison is swallowed.

“The cane toad is probably the most disgusting creature and the most destructive creature,” said Queensland politician Shane Knuth, a long-time loather of cane toads, who came up with the Toad Day Out idea. “They’re killing our native wildlife, they’re taking over our habitat and they’re hopping all through this country.”

Mr. Knuth, who has been pushing a proposal to offer a 28 cent (U.S.) bounty on the creatures since 2007, said each adult female cane toad can produce 20,000 eggs. “So if we’re able to remove 3,000 female toads, we have the potential in the long run of removing 60 million toads from our environment,” he said. No one knows exactly how many cane toads live in Australia.

Organizers are trying to woo thousands of people to take part in the hunt by offering prizes for those with the biggest toad and the highest total weight of toads. Goodies range from cane toad trophies (made of actual stuffed cane toads) to a gift certificate for a local resort.

An organizers’ tip sheet gives advice on how to create toad traps — or “detention camps” — and recommends that participants “study detention techniques to ensure your own, as well as the toad’s safety — they must be alive and unharmed for interrogation.”

Live toads brought to the collection points will be examined by experts to ensure they’re not harmless frogs and then killed, either by freezing or by being placed in plastic bags filled with carbon dioxide.

The Royal Society for the Prevention of Cruelty to Animals has applauded the effort — with one caveat. “We’re only supportive of the plan if the toads are killed humanely — in other words, they’re not hit with baseball bats or cricket bats and golf clubs,” said spokesman Michael Beatty.