I’ve been too lax in posting of late to return with such sad news: Locus publisher, editor, and co-founder Charles N. Brown, 72, died peacefully in his sleep July 12, 2009 on his way home from Readercon.

Like many a Writers of the Future alum before me, I got to know Charles briefly during the awards week in 2007. Charles knew something funny and/or incriminating about everyone is SF and was a featured speaker each year at WOTF, giving each new class insights into the SF field from his decades of first-hand experience of the genre (he was, after all, there in New York when it all began…)

The year I was at WOTF, Charles was recipient of the Hubbard Lifetime Achievement Award. He gave what I later found out was his traditional speech about what it takes to succeed in the industry and warning this newest crop of SF writers away from a life spent toiling in the sci-fi mines…

“Most of you will fail. Most of you won’t make it,” he said, to some nervous chuckling from the writers.

Sean Williams and Steve Savile later told me that reactions amongst their cohorts had been the same, with many people shocked by what Charles had to say. They said we’d actually had kind of a gentle version of his usual speech–perhaps he was tempering things this year given his impending award.

While this continued to trouble some over the next few days, others (myself included) were able not to dismiss it but, in essence, be determined that we’d prove Charles wrong.

Charles was very generous with his time at WOTF, hanging out with the writers long after many others had gone to bed. He spent many hours by the pool with us that final Saturday night, telling jokes, sharing stories…

I saw and spoke to him again briefly a few months later at World Fantasy–he spoke of looking forward to his knee-replacement surgery–but my personal favorite experience with Charles in the brief time I knew him was the Friday night of WOTF, after the award ceremony.

We’d returned to the hotel and I, still shell-shocked from my grand prize win, wandered down to the bar…only to discover it was CLOSED!

Charles Brown and Amelia Beamer (also of Locus) were there, and just as we arrived Rome and Sean Williams retired to their rooms. “Come have a seat by me,” Charles said to me. Cool.

Though the bar was closed, Amelia turned out to have snuck in a micky of Hennessey, which Charles poured into a dirty glass for me.

It might have been the best drink I’d ever had. It tasted like victory. It was a very sweet gesture on his part and I will always remember that night and that moment when I think of him. 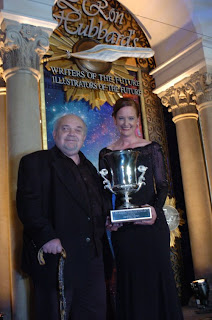