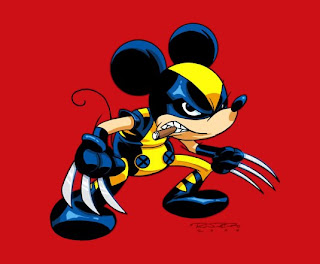 Is this the fresh hell that awaits us?

Disney bought Marvel this week and a little piece of me died when I heard the news.

The Mouse will spend $4 billion in cash and stock to acquire Marvel’s catalog of 5,000 characters–a library that includes some of the world’s best-known superheroes, including Spider-Man, the X-Men, Thor, Iron Man and the Fantastic Four.

I think that works out to an average of about $800,000 per character (though if you were to break it out doubtless some–like those listed above–would be worth far more than, say, Ant-Man…)

Marvel has forcefully exploited its most popular characters through motion pictures, video games and consumer products. But Disney sees an opportunity to plug Marvel into its vaunted global marketing and distribution system.

“Marvel’s brand and its treasure trove of content will now benefit from our extraordinary reach,” Robert A. Iger, Disney’s chief executive, said in an interview. “We paid a price that reflects the value they’ve created and the value we can create as one company. It’s a full price, but a fair price.”

Certain Marvel characters can be immediately integrated into Disney’s theme parks in California, Paris and Hong Kong. (For now, Walt Disney World in Florida is off limits because of a pact Marvel has in place with Universal Studios there.) Disney’s cable channels, in particular Disney XD, will have new intellectual property to mine. And the potential in consumer products is huge, especially overseas.

The brooding Marvel characters tend to be more popular with boys — an area where Disney could use help. While the likes of “Hannah Montana” and the blockbuster Princesses merchandising line have solidified Disney’s hold on little girls, franchises for boys have been harder to come by.

Acquiring Marvel makes Disney a partner with Paramount Pictures, Sony Pictures Entertainment and 20th Century Fox, all of which have long-term deals to make or distribute movies based on superhero characters. Sony holds the film rights to Spider-Man, for instance, while Fox has the X-Men and Fantastic Four — in perpetuity.

Paramount, a unit of Viacom, has an agreement to distribute five Marvel films, including two “Iron Man” sequels, over the next few years. Disney said it would honor the contract, but the goal is clearly to bring Marvel’s movies in-house.

Reactions to news of the deal lit up the tweetosphere Monday, with tons of Marvel-Disney crossover jokes pouring forth, with fans pointing out that Donald Duck and Howard the Duck might now be related.

Marvel Comics Editor in Chief Joe Quesada also took to Twitter in an effort to reassure comics fans about the deal.

“Welcome to this moment in history,” Quesada tweeted Monday morning. “Everyone relax, this is incredible news and all is well in the Marvel U…. Everybody take a deep breath, all your favorite comics remain unchanged and Tom Brevoort remains grouchy.”

Quesada pointed to the creative and business success that followed Disney’s purchase of Pixar for evidence that all is well within the House of Ideas.

“If you’re familiar with the Disney/Pixar relationship, then you’ll understand why this is a new dawn for Marvel and the comics industry,” he said.

Meanwhile, acclaimed comics writer Warren Ellis, who has worked for Marvel in the past, cracked wise about the pending deal.

“Why is everyone at Marvel making quacking noises today?” Ellis tweeted. “It’s horrible.”

Comments Off on Captain America vs. Mickey Mouse