Is this what James Cameron has wrought?

When I heard that a Hollywood director was consulting with BP and the US government on outside-the-box solutions to the Gulf Coast oil spill and how to plug that damn well I knew we’d entered the Twilight Zone. (Now, Cameron does have legitimate underwater cred from his underwater film work on The Abyss and Titanic–both the movie and the later documentaries he produced–but still…)

But confirmation that we’d crossed over into the Bizarro world came today with The New York Times reporting that nuclear detonations are being advocated by some “armchair engineers” (but not Cameron, at least so far) as a means to seal the oil spill.

The theory behind this “plan” (and I use the ironic quotes advisedly) is that the extreme heat an exploding atom bomb generates–temperatures hotter than the surface of the sun–when detonated under the sea floor can turn acres of porous rock into a glassy plug, much like a huge stopper in a leaky bottle.

Decades ago, the Soviet Union reportedly used nuclear blasts to successfully seal off runaway gas wells, inserting a bomb deep underground and letting its fiery heat melt the surrounding rock to shut off the flow.

The plan is being backed by “all the best scientists”, according to the blissfully, ignorantly optimistic Matt Simmons, a Houston energy expert and investment banker, who filled Bloomberg News in on his plan last Friday.

The only scientist who likes this idea is this guy: 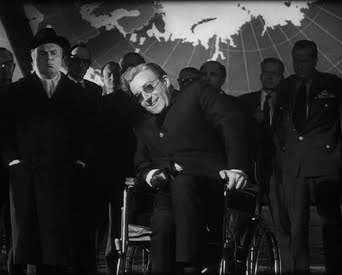 Could you imagine pitching this idea to Obama?

Obama: Is this plan really a workable option, folks?
Strangelove: It would not be difficult Mein Fuhrer! Nuclear weapons could, heh…I’m sorry–Mr. President…

With the failure of the so-called “top kill” effort to plug the leak with mud, BP has moved on to a plan that involves cutting and removing a damaged part of the crippled Deepwater Horizon drill rig (which will temporarily increase the flow from the leak by 20 PERCENT!) and putting a cap over the cleanly cut pipe. Has anyone wondered what happens if they cut the pipe and can’t then get the jimmy hat on? We have a 20% bigger problem…

This is all an effort to stop the leak temporarily while BP drills relief wells which will siphon off the oil and stop the leak, but such a plan won’t be in place until August and presents its own problems.

The drilling of those relief wells creates a whole new set of worries, including unintended fractures that would create additional leaks.

“If the rock formation that holds the oil has been cracked or compromised in any way, that pressure is going to find another way to get out,” said one official. “And if it comes up through a crack or a seam, it could come up anywhere. And that’s what they are trying to avoid.”

What frightens me most is that the oil industry cares so little about the possibility of emergency situations that there is no contingency plan for these kinds of catastrophes. Every time one of the BP stooges steps in front of a microphone to explain what the next attempt will be to staunch the flow they always include the caveat that none of what they’re proposing has ever been tried in 5000 feet of water and has a limited possibility of success.

So perhaps you shouldn’t drill somewhere you can’t fix the problems you might create. And really, BP’s every solution has sounded downright laughable: pumping heavy mud into the pipe in hopes of sealing it? Something called a ‘junk shot’–which I even heard one spokesman say was “far more hi-tech than it sounds”… Really? Because it just sounds like your going to try and cram shit down the pipe in the hopes you might block the tube. (And when the process was described that’s pretty much what the “plan” consisted of).

How was this kind of problem never foreseen and planned for? What scares me is that it probably was foreseen and planning for it would simply have cost too much money so it was ignored, assuming (as these companies always seem to) that it would never happen anyway…

Hoping everything just goes well all the time (pardon the pun) is called ‘hubris’. And you know what the gods do to those who suffer from hubris, don’t you?

I sincerely hope that the process of sealing this well (which has apparently already cost BP more than $1 billion), the hit that BP stock will continue to take because of this tragedy, and the combined costs of the civil and criminal liability they will face drive this corporation into bankruptcy. Only then, in the face of a similar fate should one of their drilling projects have a catastrophic incident, will others in the petroleum industry take seriously the need to plan ahead for contingencies, anticipate worst-case scenarios, and actually be prepared to take responsibility for their corporate actions.