This past weekend was Ad Astra, and I had such a blast.

FRIDAY:
Arrived a bit late (7 pm) for sign-in (did you know panelists didn’t have to pay? This came as quite a shock to me.) Then a quick survey of the dealer’s room (bought Jim Gardner’s short story collection, Gravity Wells) and the green room (mmm…snacks!)

At 8 pm I was off to the Birthstones book launch. Rob gave a great speech introducing Phyllis Gotlieb’s latest novel and I got my copy signed…but I think the event was under-attended due to crappy weather and going head-to-head with the SF Idol two-hour event in the main ballroom.

9 pm was an interesting panel on NASA’s plans for returning to the moon. It wasn’t quite what I hoped for, descending mostly into extended discussions of why what NASA was doing was crazy, could be done better, done cheaper, done faster, how if they’d only listen to the panelists we’d be on Mars already…

SATURDAY:
Saturday began with breakfast in the green room. Mmm…Plentiful was the spread of breakfast foods there, worthy of that secret Valhalla meant for panelists and GoHs only.

Then my first panel–Not Just a Fiction Writer. It was pretty well attended for first thing Saturday morning, though two of our panelists– Elizabeth Westbrook and Brett Savory–had to bow out due to being finalists in the SF Idol contest, and were thus madly trying to finish stories before the 2pm deadline. Elizabeth was replaced by her husband, Hayden Trenholm, who I’d met in the green room and who it turns out works for the Senate (as does a good friend of mine…) He insists that working for the government is great practice for writing fiction, because not only are you writing in someone else’s voice (in his case, the Hon. Nick G. Sibbeston, Senator for the NWT) but you make stuff up all the time 🙂

It was a real kick to meet Terence M. Green, as well. Recently retired, he used to take every fifth year off from teaching high school English to write.

And of course, I got to be on a panel with my editor, the very talented Jana Paniccia–who I discovered works for PriceWaterhouseCoopers. Yikes–that’s a REAL job! 🙂 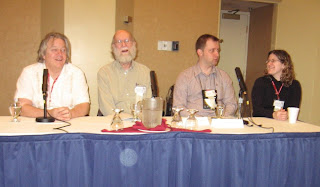 You’ll note I didn’t get the joke…it was likely at my expense, anyway.
L to R: Hayden Trenholm, Terence M. Green, myself, and Jana Paniccia 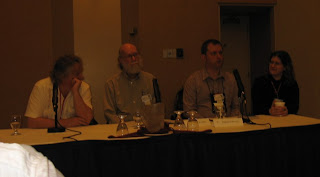 Note, too, that when I did pipe up this dark cloud seemed to cover the room…

After that, the rest of the day was taken up by various panels and with lunch with a number of the Fledglings–Mike, Karen, Brad, and Arlene. Suzanne Church, a friend of the group, also stopped by to say hello, as did our founder and guru Rob Sawyer. Karen is 9 months pregnant and I’m pretty sure Rob thinks she and Aaron are naming the kid after him. I didn’t have the heart to tell him that I know for a fact the baby will be named Coco.

Julie Czerneda was nice enough to grab me and invite me to the pizza party for her newsgroup (on which I regularly lurk). They were an extremely welcoming bunch, and made me promise a con report…so here it is guys!

Our latest Canuck SF bright light was also in attendance, Karina Sumner-Smith. She was just recently nominated for a Nebula award. Congratulations, Karina! (Everywhere she went people would exclaim at the top of their lungs: “Look! There goes Nebula-award nominee Karina Sumner-Smith!” Her almost sure-fire blushing at such halloos no doubt encouraged the practice to continue. 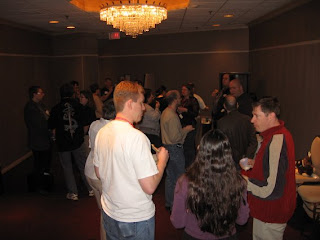 Here’s a shot from the pizza party. I’m terrible with names, but I know that the tall gent with the readhair and the woman with the long black hair next to him came all the way from New Mexico (or was it Arizona?) to attend the con. She’s a contributor to POLARIS, Julie’s OTHER new collection of short SF.

Spent much of Saturday evening in the ConSuite with Mike McPherson and Ryan Oakley, fellow alumni of the Fledglings. Very interesting conversation, very wide ranging. Not least amongst our topics were thoughts on what’s right and wrong with the SF magazines, science fiction as a genre, and book publishing in general.

We agreed that science fiction was the seminal literary art form of the 20th Century (marketing seems to be the art form of the 21st Century) but that SF is in desperate need of a new paradigm, risking the irrelevance of a niche form due to an aging (baby boomer) readership and outmoded business models that haven’t taken advantage of the brave new electronic world.

I am now convinced that between the three of us we will save science fiction and bring it to the masses. You heard it here first.

First was the long-awaited Writers of the Future panel. It was well attended for an 11 am Sunday panel (keep in mind most people at the con have likely been up all Saturday night) and it definitely filled up as the hour progressed. All in all, I think it went very well, and I very well may have learned more about the contest and what to expect from the week-long workshop than anyone else in the room. 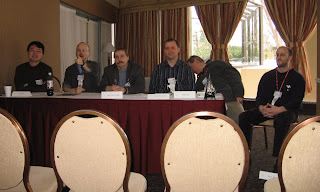 Two things you should know about Writers of the Future: 1) We don’t like having our pictures taken–you’ll notice Rob has just discovered someone in the audience has a camera, and Mike Rimar has gone so far as to duck behind my chair; and 2) We have cooties–hence no one sitting in the front row.
L to R: Tony Pi (WOTF 23), Rob Sawyer (WOTF judge), James Alan Gardner (WOTF 6, and Grand Prize Winner), myself (WOTF 23), Mike Rimar (WOTF 21), and Jim Hines (WOTF 15). 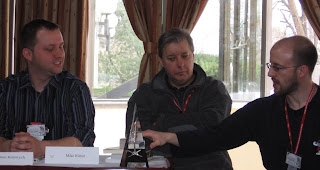 Here’s a better shot of Mike Rimar and Jim Hines. Note Mike’s cool trophy. Apparently I get a bigger version as a first-place winner. That should be fun trying to get through security at the airport… 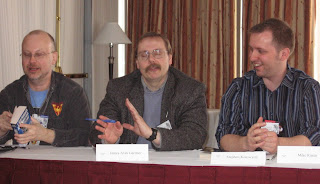 Rob settles a question of the contest rules by checking the back of the anthology. For some reason, just because he’s a judge, he assumed he knew more about how the contest worked than we contestants…

Immediately following the WotF panel was the second launch for UNDER COVER OF DARKNESS which was exceptionally well attended and a lot of fun. Bakka was selling books and were left with only a handful. The line-up for autographs was so long we actually ran half an hour into the room time booked for the next panel.

Alas, my camera was dying at that point so I wasn’t able to get photos of the event personally. Though I recall a few flash bulbs going off so maybe I can track some down…
(UPDATE: Julie has a bunch of photos from the launch–and AD ASTRA 2007 generally–on her website. Find them here.) 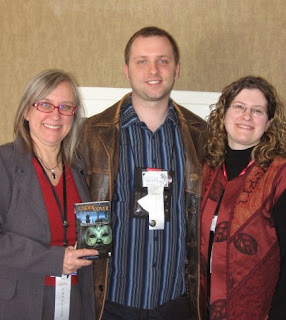 I was, however, able to get a photo with my lovely editors, Julie Czerneda (L), and Jana Panniccia (R). I am forever grateful for their faith in this unknown writer.