So the whirlwind continues…

I’m back in Toronto just long enough to do some laundry and pack again for a trip to Chicago, where I’ll attend the American Political Science Association annual meeting as part of my responsibilities in the scholarly book editor day job.

Suffice to say I haven’t much time then to go into detail about the WOTF week the way I’d like. What I will promise, oh loyal reader, oh true believer, is that when I return from Chicago I’ll run such a series on the WOTF week as to make you regret ever asking for details (perhaps you already do…)

So beginning Sunday, September 2, I’ll post a week-long day-by-by recap of the events of the Writers of the Future week, along with my thoughts, reflections, and impressions about the most amazing, incredible week of my life.

In the meantime, however, you can content yourselves with the recap of events on the WOTF blog, as well as on several blogs by my friends in the WOTF 23 cohort. You can find some of them in the links sidebar now, with more to come soon.

To tease you, however, here are a couple of photos from my 166 MB (!) of shutterbugishness during the week: 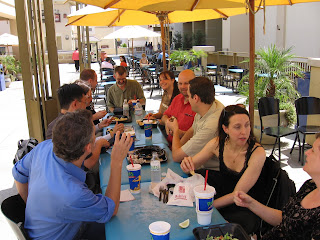 What a good looking group of writers… We were fueled almost
entirely by takeout Mexican food from Rubio’s that week. 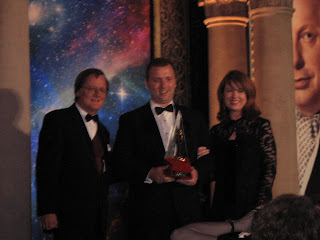 A somewhat blurry shot of the Big Moment, which is okay because at this point it’s actually how I was seeing the world–rather shaky and kind of fuzzy around the edges. To my left is Tim Powers–writing instructor extraordinare, Coca Cola fiend, and all-around good guy. He was the only thing holding me up at this point. 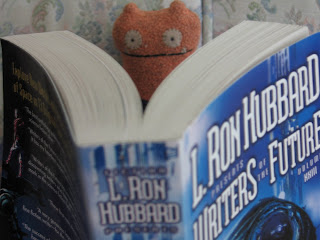 The world’s smallest (and ugliest) science fiction fan, sinking his
teeth into a pre-release copy of the anthology and enjoying it very much.

More to come next week!

Comments Off on Sweet Home Chicago