Writers of the Future Journal, Take 2 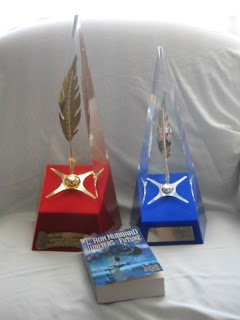 Okay, okay–I know. My great plan to do a week-long series of posts about the Writers of the Future award week in August kinda got derailed somewhere in, oh, August 🙂

The original plan was to do a series of lengthy, day-by-day posts (with pictures!) about the experience of the award week so that you, as a reader, could get a bit of a sense what it was like.

I got as far as Thursday, which is ironic given that the biggest stuff happened Friday 🙂 The problem with my original plan was that I didn’t anticipate how long it would take me to do each entry.

See, in the months leading up to the award week I scoured the tubes of the internet for any information I could glean about the goings-on at the WOTF week from posts made by past winners and participants. I got a lot from the accounts of people like Scott Nicholson, Ron Collins, and I must credit the great journals by Mike Rimar (who I was also lucky enough to get to question in person at last year’s Ad Astra), and David D. Levine as my direct inspiration for the day-by-day breakdown.

(NB: I was also in touch via e-mail with many of these same folk in the lead-up to the week, asking for any advice they had on how to get the most out of the week, things they wish they’d done or not done, etc. Without exception the previous winners I was in touch with were friendly, helpful, and excited for me. The universal comment was “I wish I could go again!” and that really speaks volumes of the workshop, awards, and the people who put them on. By the way, some of the advice I got? Tobias Buckell very sagely told me to stick as close to Tim Powers as I could all week–advice I tried to heed, hence my flirtation with taking up smoking for seven days–and Jim Hines told me to keep my inner fanboy in check–advice I ignored only once, when I introduced myself to Larry Niven and, well, we all know how that went…)

So, having gotten so much from these posts I, too, wanted to write up something that would really be of use to people going to the awards and interested in what to expect, and to those considering entering and wanting to get a sense of what can happen.

But that took a lot longer than I thought it would 🙂

And now I see that all the winners from this year’s edition of the contest have been chosen…and I’m STILL not done posting about my trip to the awards. There’s a strange thrill in knowing that these people are in line for a truly life-changing week, and that amongst them is the person to whom I’ll have to pass the sash and tiara of Grand Prize Winner…

And so, if you’ll indulge me, I’m going to try and do what I set out to do the first time: starting today, Sunday Jan. 20, and running until this Saturday Jan. 26, I’m going to repost my series of journals about my WOTF experience and I’m actually going to finish the posts for the Friday and the Saturday & Sunday of the award week.

Now, I’ll add some new content to the old posts (consider these the digitally enhanced Special Edition 🙂 and I got a lot of positive feedback on the journal, so hopefully you’ll enjoy seeing what the Big Day and the rest of the weekend was like from my particularly stunned perspective 🙂

2 Responses to Writers of the Future Journal, Take 2