…But Their T-Shirts Were Great!

I take in a lot of live music and last night a friend and I went to see a triple-bill: Louis XIV, Hot Hot Heat, and Editors.

There seem to be a lot more triple bills lately in Toronto (not sure why) and they can be kinda hit and miss. In this case, even though Editors were the headliners (they’re the hot new thing from the UK, apparently) I was there to see Hot Hot Heat–a great Canadian indie act who put on a fabulous show, despite some technical difficulties with the lead singer’s keyboard.

Louis XIV were okay, though their songs seemed to be just getting started when suddenly they’d end–they had no peaks or dynamics and little in the way of changes or drama. But I do give them props for singing mostly about sex and evil: two founding concepts of rock n’ roll that have been overlooked of late in the whiny-teenage-nobody-loves-me-I’m-so-dark-and-complex-you-couldn’t-
possibly-understand-me nouveau emo and pop punk chic that’s been dominating the scene of late.

Is it any wonder that music sales are down?

And Editors left me less than impressed. The crowd was clearly full of big fans but their songs all ran together into a pretty bland sound, to me. And their sound was Coldplay-meets-The Killers (which means that they really wanted to sound like U2) with a singer who was doing his best Ian Curtis impression.

What was clear is that the British like their rockers prettier and more clean cut than we seem to in North America: Editors were all thin, well coiffed, in matching black-and-white outfits (down to their instruments), and apparently don’t perspire (hard to do when one doesn’t really move from his place on stage during the course of the show, lest the lights not find him). You could have substituted anyone of them for any member of several Brit rock bands (including Chris Martin of Coldplay, who would have been right at home on stage, given that not only the light show but also his trademark piano had been snatched by lead singer of Editors) and likely no one would have noticed.

Louis XIV (from San Diego, CA) and Hot Hot Heat (from Victoria, BC) were sweaty, hairy, unkempt rockers with nary a matching instrument or piece of clothing amongst them. Far more rock n’ roll.

I will say this for Editors, however: great merch.

While still in the club’s foyer, and having never heard a song by Editors, I nabbed this t-shirt (given that my day job is as an editor I couldn’t resist): 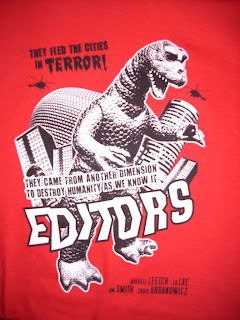 Everybody at work wants one now, too 😉

Comments Off on …But Their T-Shirts Were Great!