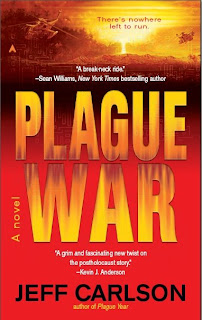 Egads! After my post the other day, I realized that I hadn’t yet heralded my friend and fellow WOTFian’s latest book, Plague War.

Plague War is the fantastic sequel to Jeff’s debut novel, Plague Year (which he was signing copies of when we were at events for WOTF 23–you can imagine how impressed we all were that one of us had already “made it” in publishing).

And as I mentioned the other day, he has a fabulous trailer up at his website here. If you can, be sure to watch the hi-def version of the video: it’s set high in the mountains and is just gorgeous.

While I enjoyed the book from cover to cover, if I had to pick out a favorite chapter it would be Chapter 5 when a certain Private Kotowych makes his first appearance… 😉