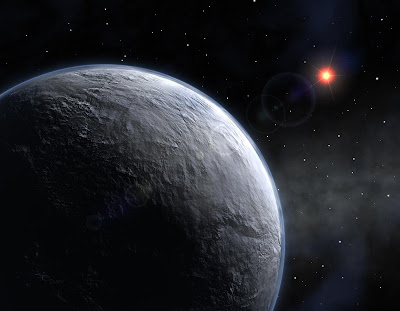 Cool news recently in New Scientist: the hitherto smallest known planet around a star other than the Sun may be even smaller than first thought.

But now, after more recent observations and some recalculation, the team believes the parent star is actually a red dwarf, and thus heavier than first thought (those pesky dwarfs with all their confusing colours…)

The implication is that if the star is heavier then the planet is lighter: significantly so, in fact, weighing in at around a mere 1.4 Earths. In size terms, that makes it a near twin of our own planet, closer in mass than any known planet except Venus.

So good news: we’ve found a planet much closer in size to Earth than other exoplanets we’ve found to date.

But bad news: it’s still around 3000 light years from Earth, made mostly of rock and ice, and if it has any sort of atmosphere it’s likely to be composed primarily of hydrogen. So if we do somehow discover FTL and ever get there no smoking, okay?

More details can be found here.

2 Responses to Smallest known exoplanet may actually be Earth-mass