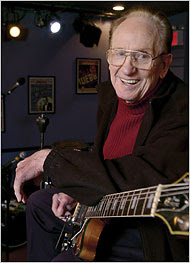 I was saddened today by news of the death of Les Paul, pioneer of both the solid-body electric guitar and multi-track recording. He was 94.

While he was a jazz and country guitarist by inclination, Les Paul’s semi-hollow body and later solid body guitars (especially the line of Gibson and Epiphone electrics that bear his name) became a mainstay of rock and roll. They have been played by everyone from Jimmy Page and Eric Clapton to Slash and Lenny Kravitz. My own short-lived first job (4-months at McDonald’s) was undertaken with the sole intention of buying my own electic guitar, a Les Paul Custom. 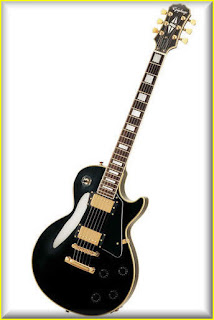 His name is Zaphod…

But more than his inventive and musical accomplishments, you know what always impressed me about Les Paul?

He once broke his right arm and elbow; doctors told him that the nature of the break meant he would never again be able to bend his arm. Rather than moan about permanent disfigurment he simply asked the doctor to set his right arm–his picking arm–at a 90-degree angle so he could continue to play his guitar.

WHITE PLAINS, N.Y. — Les Paul, who pioneered the solid-body electric guitar later wielded by a legion of rock ‘n’ roll greats, died Thursday of complications from pneumonia. He was 94. According to Gibson Guitar, Paul died at White Plains Hospital. His family and friends were by his side.

As an inventor, Paul also helped bring about the rise of rock ‘n’ roll with multitrack recording, which enables artists to record different instruments at different times, sing harmony with themselves, and then carefully balance the tracks in the finished recording.

The use of electric-amplified guitars gained popularity in the mid-to-late 1940s, and then exploded with the advent of rock in the mid-’50s.

“Suddenly, it was recognized that power was a very important part of music,” Paul once said. “To have the dynamics, to have the way of expressing yourself beyond the normal limits of an unamplified instrument, was incredible. Today a guy wouldn’t think of singing a song on a stage without a microphone and a sound system.”

“Without Les Paul, we would not have rock and roll as we know it,” said Terry Stewart, president of the Rock and Roll Hall of Fame and Museum. “His inventions created the infrastructure for the music and his playing style will ripple through generations. He was truly an architect of rock and roll.”

A tinkerer and musician since childhood, he experimented with guitar amplification for years before coming up in 1941 with what he called “The Log,” a four-by-four piece of wood strung with steel strings. He felt a solid body would give the instrument a different sound from a traditional hollow guitar with an electrical pickup added to it.

“I went into a nightclub and played it. Of course, everybody had me labeled as a nut.” He later put the wooden wings onto the body to give it a tradition guitar shape.

Leo Fender’s Broadcaster was the first mass-produced solid body electric on the market in the late 1940s. In 1952, Gibson Guitars began production on the Les Paul guitar.

Pete Townshend of the Who, Steve Howe of Yes, jazz great Al DiMeola and Led Zeppelin’s Jimmy Page all made the Gibson Les Paul their trademark six-string.

Over the years, the Les Paul series has become one of the most widely used guitars in the music industry. In 2005, Christie’s auction house sold a 1955 Gibson Les Paul for $45,600.

In the late 1960s, Paul retired from music to concentrate on his inventions. His interest in country music was rekindled in the mid-’70s and he teamed up with Chet Atkins for two albums. The duo were awarded a Grammy for best country instrumental performance of 1976 for their “Chester and Lester” album.

With Mary Ford, his wife from 1949 to 1962, he earned 36 gold records for hits including “Vaya Con Dios” and “How High the Moon,” which both hit No. 1. Many of their songs used overdubbing techniques that Paul had helped develop.

“I could take my Mary and make her three, six, nine, 12, as many voices as I wished,” he recalled. “This is quite an asset.” The overdubbing technique was highly influential on later recording artists such as the Carpenters.

Released in 2005, “Les Paul & Friends: American Made, World Played” was his first album of new material since those 1970s recordings. Among those playing with him: Peter Frampton, Jeff Beck, Eric Clapton and Richie Sambora.

“They’re not only my friends, but they’re great players,” Paul told The Associated Press. “I never stop being amazed by all the different ways of playing the guitar and making it deliver a message.”

Paul was inducted into the National Inventors Hall of Fame in 2005.

Paul was born Lester William Polfuss, in Waukesha, Wis., on June 9, 1915. He began his career as a musician, billing himself as Red Hot Red or Rhubarb Red. He toured with the popular Chicago band Rube Tronson and His Texas Cowboys and led the house band on WJJD radio in Chicago.

In the mid-1930s he joined Fred Waring’s Pennsylvanians and soon moved to New York to form the Les Paul Trio, with Jim Atkins and bassist Ernie Newton.

Meanwhile, he had made his first attempt at audio amplification at age 13. Unhappy with the amount of volume produced by his acoustic guitar, Paul tried placing a telephone receiver under the strings. Although this worked to some extent, only two strings were amplified and the volume level was still too low.

By placing a phonograph needle in the guitar, all six strings were amplified, which proved to be much louder. Paul was playing a working prototype of the electric guitar in 1929.

His work on taping techniques began in the years after World War II, when Bing Crosby gave him a tape recorder. Drawing on his earlier experimentation with his homemade record-cutting machines, Paul added an additional playback head to the recorder. The result was a delayed effect that became known as tape echo.

Paul’s next “crazy idea” was to stack together eight mono tape machines and send their outputs to one piece of tape, stacking the recording heads on top of each other. The resulting machine served as the forerunner to today’s multitrack recorders.

In 1954, Paul commissioned Ampex to build the first eight-track tape recorder, later known as “Sel-Sync,” in which a recording head could simultaneously record a new track and play back previous ones.

He had met Ford, then known as Colleen Summers, in the 1940s while working as a studio musician in Los Angeles. For seven years in the 1950s, Paul and Ford broadcast a TV show from their home in Mahwah, N.J. Ford died in 1977, 15 years after they divorced.

In recent years, even after his illness in early 2006, Paul played Monday nights at New York night spots. Such stars as Led Zeppelin’s Jimmy Page, Dire Straits’ Mark Knopfler, Bruce Springsteen and Eddie Van Halen came to pay tribute and sit in with him.

“It’s where we were the happiest, in a `joint,'” he said in a 2000 interview with the AP. “It was not being on top. The fun was getting there, not staying there — that’s hard work.”