Octopuses Master Use of Tools. World Domination to Follow.

Apparently the veined octopus (Amphioctopus marginatus) has mastered the use of tools: members of this species have been observed in the wild using coconut-shell halves as faux shells and as hiding places.

You can find articles here, here, and here.

The veined octopus selects halved coconut shells from the sea floor, empties them out, carries them suctioned under their bodies up to 20 metres, and assembles two shells together to make a spherical hiding spot, like so: 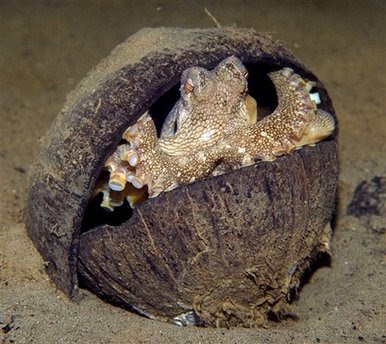 The video on the National Geographic website (here) is just incredible to watch.

Note, though, at the end of that video the octopus demonstrating its natural hatred of man and instinct to attack him. Have we learned nothing from Capt. Nemo and the tragedy of the Nautilus?

I’ve long thought that if humans were wiped out on land, cephalopods would evolve the ability to breath air and take our place as the dominant species on the planet. They have massive brains relative to the size of their bodies, they can change shape and colour, they have eight prehensile limbs, an ink jet… Sounds like a super organism to me.

Now that they are beginning to master tools it’s only a matter of time until homo sapiens‘ existence as a species is threatened. How are we supposed to compete with a creature that has four times as many arms as we do? What if they learn jujitsu? Can you imagine how unstoppable an eight-limed ninja would be!??!

I, for one, welcome our octopus overlords…

2 Responses to Octopuses Master Use of Tools. World Domination to Follow.