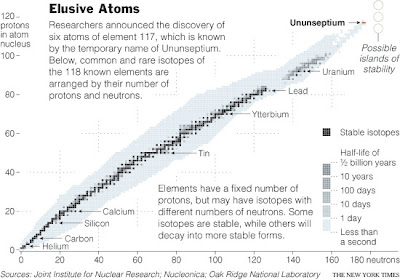 A team of Russian and American scientists has discovered a new element that has long stood as a missing link among the heaviest bits of atomic matter ever produced. The element, still nameless, appears to point the way toward a brew of still more massive elements with chemical properties no one can predict.

The team produced six atoms of the element by smashing together isotopes of calcium and a radioactive element called berkelium in a particle accelerator.

Data collected by the team seem to support what theorists have long suspected: that as newly created elements become heavier and heavier they will eventually become much more stable and longer-lived than the fleeting bits of artificially produced matter seen so far.

If the trend continues toward a theorized “island of stability” at higher masses, said Dawn A. Shaughnessy, a chemist at Lawrence Livermore National Laboratory in California who is on the team, the work could generate an array of strange new materials with as yet unimagined scientific and practical uses.

When asked about a possible name for Element 117–temporarily named ununseptium–Dr. Shaughnessy said that while “it’s so fundamentally cool” to add a square to the Periodic Table of the Elements, there’s been no discussion of a name.

“We’ve never discussed names because it’s sort of like bad karma,” she said. “It’s like talking about a no-hitter during the no-hitter. We’ve never spoken of it aloud.”

Comments Off on Elemental, Dear Watson!