The fascinating real life, inventions, and legacy of Nikola Tesla, told in a twice-monthly podcast.

It was the Fair That Changed America. And it was the chance for Tesla and Westinghouse to show the world the power of their AC system. The 1893 World’s Columbian Exposition made Tesla a household name and changed his life forever.

Westinghouse makes an 11th-hour bid to electrify the Chicago World’s Fair of 1893 with Tesla’s AC system and GE will do anything to torpedo the deal. Welcome to Thunderdome: two bids enter, one bid leaves…

Edison and Westinghouse battle over lightbulbs and high finance as we return to the trenches of the War of the Currents, and see how the war whittled itself down from fifteen combatants to just two…

Tesla’s trip to the Continent would take an emotional and physical toll that he couldn’t have imagined. But he nevertheless returned from Europe with the big idea that would dominate the rest of his career.

When his colleagues in the AC field start turning on him, Tesla uses an invitation to lecture in London to reassert his place as the inventor of the AC motor and to dazzle Victorian London with all-new discoveries. 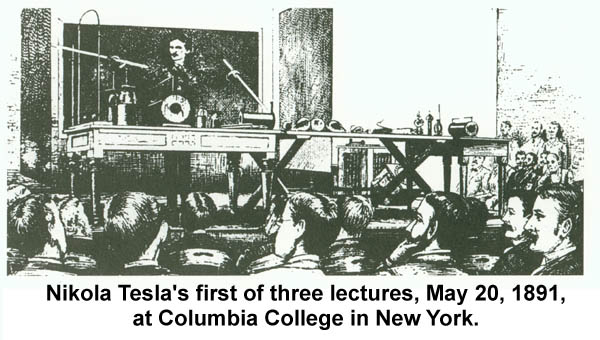 The History of Rome Podcast by Mike Duncan

Tesla the Showman knocks ’em dead at the AIEE with a lecture for the ages and a breathtaking demonstration of high frequency AC. It was his ticket to fame and celebrity.

As mentioned in this week’s episode, to get a good visual sense of how Tesla would use the ‘skin effect’ of his oscillating transformer to wow Gilded Age audiences, you need look no further than David Bowie’s portrayal of Nikola Tesla from the Christopher Nolan movie, The Prestige (if you haven’t seen it–seriously, do so right away):

And while there are apparently no photographs of these moments, Tesla would also create a glowing halo of energy around himself at his demonstrations, as illustrated here:

Fresh from his return from Europe, Tesla goes on an inventing spree and dabbles in high-frequency currents. But when George Westinghouse comes calling and pleads poverty, Tesla makes a fateful and costly mistake…

The War of the Currents enters its most ghoulish and macabre phase: when the combatants were willing to play with a man’s life. William Kemmler became the first person put to death by deliberate electrocution. Viewer discretion is very much advised.