Congratulations to Emery Huang and All the Writers of the Future Winners!

Just got back from Writers of the Future XXV where I had an absolute blast. It was great to catch up with old friends and to make some new ones, too.

I’ll post my photos and stuff later on this week (hopefully) but for right now I jut wanted to congratulate all the winners of this year’s Writers and Illustrators of the Future. In particular I want congratulate Emery Huang, this year’s Grand Prize winner! That’s him in the picture below–the one in the green shirt. Welcome to the club, Emery!

But get this: in addition to the award, the adulation, and the money, as this year’s Grand Prize winner Emery gets a trip on the Cairo leg of the World Airship Race 2010–he’s going to be racing to the Giza Plateau in a zeppelin! Suddenly, he’s a character in a steampunk tale! Reminds me of something Michael Moorcock wrote… 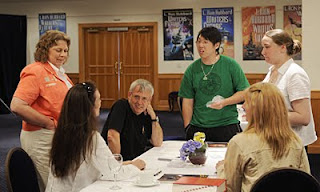 That’s him in the green:
Emery Huang, Warlord of the Air!

My special thanks also go out to Jordan Lapp–a First Place quarterly winner and fellow Canuck, who I was lucky enough to be roommates with from Wednesday onward–as well as to Fiona Lehn, also doing Canada proud in Writers of the Future.

But really it’s hard to single out any of the winners above another–they were all a tremendous amount of fun and very energizing to be around. Made me want to redouble my efforts to get this book done! And I think its nice how welcoming WOTF classes are to returning winners–there’s a real comradeship and a club-like feeling between WOTF winners, I find. Anyway, an absolute first-rate bunch to hang around with. Can’t wait to tuck into the Writers of the Future XXV antho and read their stories.

Now off to bed! For tomorrow, the Real World intrudes again…

2 Responses to Congratulations to Emery Huang and All the Writers of the Future Winners!