Paleontologists Have Lied to Us! 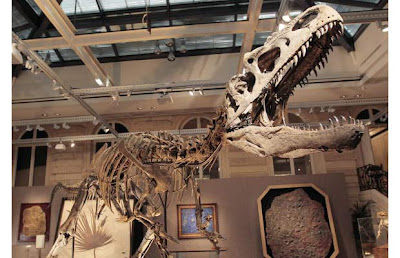 A fossilized sauropod bone, dated by a team of Canadian and U.S. scientists to 64.8 million years ago, appears likely to force a serious rethinking of the demise of dinosaurs, which were supposed to have been wiped out in a catastrophic meteorite strike no later than 65.5 million years ago — 700,000 years before the death of the giant, vegetarian beast that left its femur behind in present-day New Mexico.

A study of the bone in the latest issue of the journal Geology, co-authored by University of Alberta paleontologist Larry Heaman and two U.S. colleagues, “confounds the long established paradigm that the age of the dinosaurs ended between 65.5 million and 66 million years ago,” states a summary of the findings.

The study also represents a landmark achievement in the use of a uranium-lead dating technique — developed at the University of Alberta — that allowed the team to pinpoint the age of the bone directly from a fragment of the specimen, not just indirectly from the layer of rock in which it was found.

The bone was unearthed near the New Mexico-Colorado border by U.S. paleontologist James Fassett, one of the study’s two American co-authors.

In the past, Fassett has controversially proposed that the region may have been a refuge for some dinosaurs that survived the colossal meteorite strike widely believed to have ended the dinosaur age between 65.5 and 66 million years ago.

The new findings appear to support Fassett’s theory that at least some dinosaurs survived the catastrophic impact and persisted for hundreds of thousands of years.

“For some time, there’s been other evidence that suggests dinosaurs survived,” he said, at least in some small pockets, after their supposed extinction.

But it hasn’t been “ironclad evidence,” he noted. “What was missing was some way to directly date the bone itself. Up to now, it’s just never been possible, so this is the first real success.”

Heaman said confirming the New Mexican sauropod bone as 64.8 million years old “opens the door to all kinds of questions,” including the validity of the theory that a single meteorite strike destroyed all dinosaur habitats around the world in a very short time.

Recent studies have challenged that theory including some suggesting a series of meteorite impacts caused the dinosaurs to disappear and others positing massive volcanic eruptions that triggered deadly, planetwide climate disturbances.

So here’s what I’ve never understood: if birds are descended from dinosaurs…then doesn’t that presuppose that at least some dinosaurs survived after the extinction (however caused) of the majority of the form? I would think it would be hard to evolve from a life form that was 100% extinct.

Comments Off on Paleontologists Have Lied to Us!