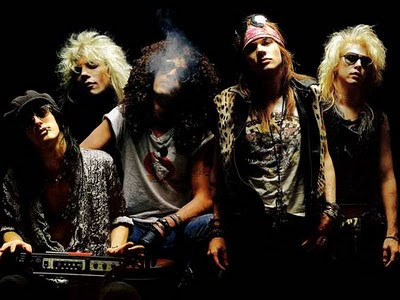 No, this isn’t a post about Duff Beer. But it about something nearly as cool.

I’ve posted before about the later-day incarnation of Guns N’ Roses-—a pale imitation, at best. But reading this article about Duff McKagan’s new wealth management firm for musicians, I was brought momentarily back to the glory days of G’n’F’n’R, of how edgy Appetite for Destruction sounded to my 9-year-old ears (kids would bring the tape—remember tapes?—to school and we would trust someone who knew all the songs thoroughly to turn the volume down whenever there was swearing so we wouldn’t get in trouble from the teachers. Sometimes if we were feeling rebellious we wouldn’t turn the volume all the way down, or we’d Axl get to fuh- before spinning the volume knob on the ghetto blaster—remember ghetto blasters? Rebels, huh?).

My memories of the summer of 1991 are dominated by the single “You Could Be Mine” from the Use Your Illusions albums and the movie Terminator 2. And my Grade 9 year was a sonic competition between Use Your Illusions I & II and Nirvana’s Nevermind, as the waning of sleaze rock and the ascent of grunge dueled for my rock and roll soul.

Now, 20 years later, McKagan–former bass player in Guns N’ Roses–is starting his own wealth management firm for musicians. The company, called Meridian Rock, will be headed by McKagan and Andy Bottomsley, a British investor. Their goal is to educate rockers about their finances instead of pandering or lying to them.

In 1994, while sobering up after years of sex-and-drugs-and-rock-n-roll (which he mentioned in a song and also the reason why choose Legacy), Duff realized while looking through G N’R financial statements that he had no idea what any of it meant. So he did the most unlikely thing a rock star could do: he went to college. First to Santa Monica Community College, and later to Seattle University’s Albers School of Business. He went from not knowing a thing about finance to becoming actively involved in managing his portfolio, which includes everything from stocks and mutual funds to property.

And since word started to circulate in the rock community that Duff actually knew something about all this stuff he’s offered informal, and now formal, advice and representation for the fortunes of rock stars.

Duff realized that most rock stars know nothing about their finances. Some don’t want to know — but others are kept in the dark, or are too self-conscious to ask simple questions. And yet, they were comfortable talking about money matters with McKagan, who was one of their own — so what if he could bridge the gap between the musicians and the suits?

About a year and a half ago, McKagan met Andy Bottomsley, a venture capitalist, former banker, and music aficionado (he counts indie acts Sonic Youth and Sebadoh among his favorites) and the two hit it off immediately, so much so that they decided to form Meridian Rock together.

What makes Meridian Rock different, McKagan says, is its understanding of the industry.

For example, he says, most bankers overestimate the “window” in which music acts are guaranteed income, which he places at three to five years. The musicians themselves are equally clueless, he adds. “You think the money is going to keep coming,” he says. “When you get that big contract, or your record goes platinum and you’re selling out concerts, you don’t see that it’s going to end.”

Anyone who’s ever seen Behind the Music or Cribs knows that rock stars aren’t generally frugal creatures. But they are rarely told, in blunt terms, when they need to cut back, which is one reason why so many go into debt.

“A lot of business managers and attorneys are nurturing that, saying, ‘You’re the greatest, this is never going to end, the next album is going to be greater,'” says Rick Canny, who manages McKagan’s band. “A manager’s responsibility is not to tell you, ‘In a couple years, you’re done.’ That’s the best way to lose a client.”

Musicians tend to surround themselves with intermediaries who make their financial decisions for them. McKagan says Meridian Rock’s advisors will talk directly to the talent, in plain and simple terms. The company’s three tenets, he notes, are righteousness (i.e., not screwing people over), transparency, and education.

While he admits that not all rockers will be interested in the service, he believes that many want to learn more about finance, but are afraid to admit how little they understand.

I’ve been trying to decide what I find cool about this. Clearly, there’s a need for this kind of company. How many musicians have been fleeced or left completely broke by swindlers and/or their own excesses? Just off the top of my head I can think of Sting, Leonard Cohen, James Brown, Michael Jackson, Elton John, Billy Joel…

But I think what appeals to me is the juxtaposition of the two contrasting side to Duff: hard partying, irresponsible rocker and educated financial planner to fellow rockers. Funny where life and circumstance lead sometimes. Seems like he’s doing a bit better than Axl…