Global Warming in the Mesozoic Era 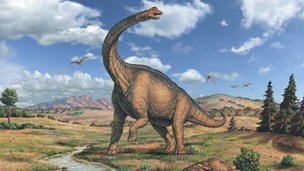 Did you know that the Earth was up to 10C (18F) warmer in the Mesozoic Era? Well, scientists do. And some enterprising scientists have just published results in the journal Current Biology that may suggest why the Earth was so much warmer then.

Yup, you read that right.

These scientists have calculated the (ahem) “methane output” of sauropods (think Brontosaurus) as 520 million tonnes of gas annually. They based this on the dinosaurs’ estimated total population and used a scale that links biomass to methane output for modern day cattle (which produce somewhere around 50-100 million tonnes of, uh, flatus per year). They suggest the methane produced by veggie-loving dinos could have been a key factor in the warm climate 150 million years ago.

It occurs to me that dinosaurs seem determined to warm the Earth’s climate at any cost and across all time and space: first they fart their way to tropical temperatures 150 million years ago and now they’ve tricked us into burning their liquified bones (petroleum) and heating the atmosphere again. Sneaky dinosaurs…

Comments Off on Global Warming in the Mesozoic Era