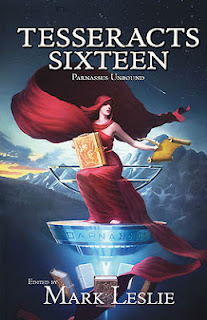 I’m very pleased to announce that “Saturn in G Minor”–which won the Writers of the Future Grand Prize–has been selected for inclusion in Tesseracts Sixteen: Parnassus Unbound, due out this September from EDGE Science Fiction and Fantasy Publishing. The Tesseracts series is the storied annual anthology of Canadian speculative fiction, and I’m thrilled to be making my second appearance in the series (my story “Citius, Altius, Fortius” was published in Tesseracts Eleven)

The theme for Tesseracts Sixteen: Parnassus Unbound is speculative fiction inspired by literature, music, art and culture. The collection is subtitled for Mount Parnassus, which in Greek mythology was a mountain sacred to Apollo–god of music and poetry–and the home to the Muses. Consequently, Parnassus became known as the home of poetry, music, and learning.

And get this! I’m in the collection with not only Robert J. Sawyer and Kevin J. Anderson–both friends and mentors–but with Neil Peart! Yeah–the drummer from Rush. THAT Neil Peart! How cool is that!?! And not only do I love the cover, but it gives it added significance–it looks like a prog rock album cover!

This is going to be a fun anthology to be part of!

I’m sure there will be signings and events to launch the book later this year–watch here for updates!

Comments Off on My Story in Tesseracts Sixteen: Parnassus Unbound