The Big Day has arrived–the ZNB Books 2022 Kickstarter has launched! We’ve got just 30 days to hit the goal so that not one but FOUR fantastic new science fiction and fantasy anthologies can come to life.

As I mentioned before, the volume I’m co-editing with Tony Pi is called GAME ON! and focuses on games and gaming in sci-fi and fantasy. You can find all the details about the call right here.

I’m also thrilled to announce the incredible line-up of anchor authors Tony and I have secured for GAME ON! Here they are, along with the games(s) they’ve chosen to write about:

Eric Choi – Video gambling
An aerospace engineer by day, a SF writer and editor by night. He is the first recipient of the Isaac Asimov Award (now the Dell Magazines Award) and has twice won the Aurora Award for fiction and editing.

Cat Rambo – Euchre
A Nebula Award winner, and with multiple Locus Award nominations, Cat has published novels through Tor and WordFire, and short fiction in venues like Tor.com, Asimov’s, and Analog, amongst others.

Sean Williams – Hide-and-seek
Author of 65 novels and 6 collections of short fiction, Sean is the winner of multiple Ditmar and Aurealis Awards.

Melissa Yuan-Innes – Haunted house game
An emergency room physician, Melissa’s novels have been praised by The Globe and Mail, CBC Books, and The Next Chapter. Her short stories have won the Writers of the Future Award, been finalists for the Derringer Award for the world’s best short mystery fiction, and been shortlisted for the Crime Writers of Canada Arthur Ellis Award.

I’m sooo excited to seeing what stories these authors produce for the anthology and I hope you are, too! Go and back the Kickstarter right now to help ensure the anthology funds and we all get to see these stories.

Comments Off on Our Kickstarter goes live! Anchor authors revealed!

Tagged as game on

Been sitting on this news for a while: I’m thrilled to announce I’m going to be co-editing (with my friend and evil twin, Tony Pi) a new anthology of science fiction and fantasy stories for Zombies Need Brains!

Our theme for the anthology is games and gaming in sci-fi and fantasy. I’ve had this idea for a while and we have some FANTASTIC anchor authors lined up already. 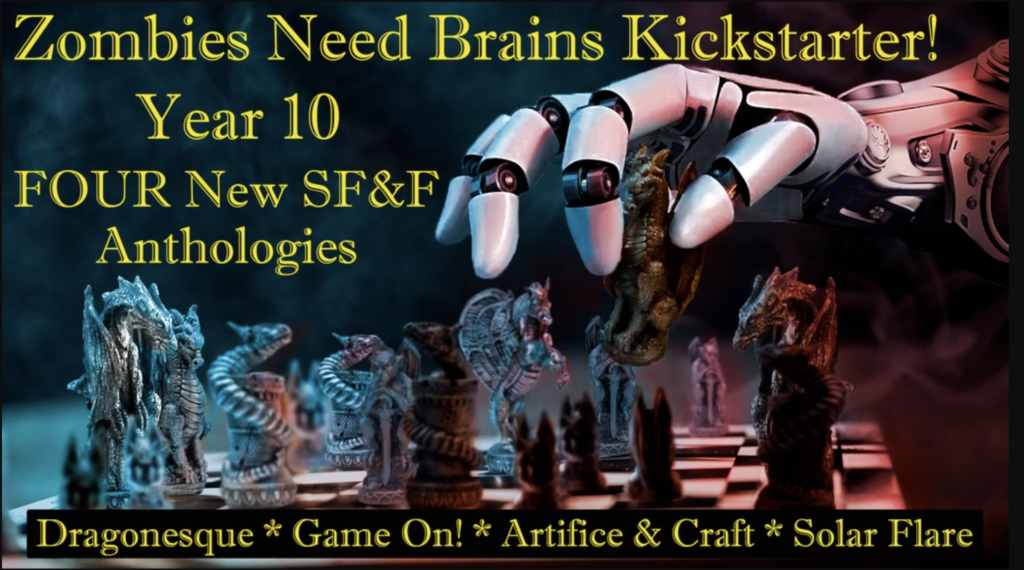 But there will also be an open call! We want to find as many great stories from new and up-and-coming authors as we can. My very first publication was a pro-rates SFWA-qualifying sale to an anthology from DAW Books and I would desperately LOVE to be someone’s first professional sale.

For the writer-types out there, check back here frequently in late August and early September for a series of posts about what I’m looking for when buying stories for the book and some insight into what I think makes a good game-themed story.

ZNB anthologies are all funded through Kickstarter and our anthology will be just one of FOUR that you can get all together when you back the campaign. In addition to our volume, there will be anthologies focused on dragons, solarpunk, and enchanted works of art!

You can get a reminder of when the campaign kicks off on August 15th by clicking right here. If you’re excited by these themes then we need your help to ensure the Kickstarter funds, or else none of the books will happen. So sign up for that reminder and tell a friend who you think would be interested.

Comments Off on I’m editing a new science fiction and fantasy anthology!