I clicked my heels three times…

…and saying “There’s no place like home,” I magically returned from Oz…err, Aus…I mean from AUSTRALIA. 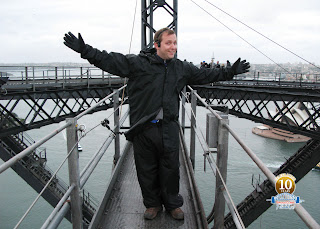 Me, 140m in the air, on the catwalk atop the Sydney Harbor Bridge,
wondering how I talked myself into the Bridge Climb…You can see
the Sydney Opera House behind me, to the right.

Yes, Australia, where I spent two glorious months vacationing, seeing friends, and checking off another item from the “Things I’ve Always Wanted To Do” list (for those of you keeping score, ‘Travel to Australia (and specifically to Kakadu National Park)’ was #2, right after ‘Get Published’. Next up on the list: a subset of #1, which is ‘Publish a Novel’.)

While I was trekking through the Outback I was often away from computers generally, and the internet specifically, hence the long radio silence on the blog. 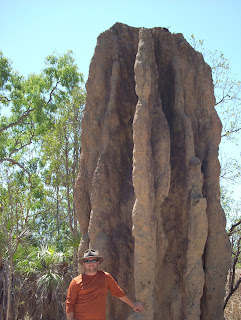 Despite the height of these cathedral termite mounds,
they make remarkably poor wireless internet hot spots…

But fear not! My new goal, starting today, is to have a little something to post each day, Monday through Friday–the goal of any good blog 🙂 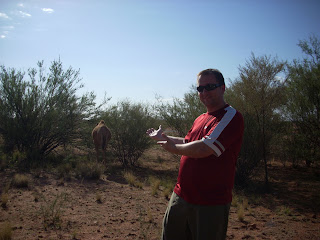 While driving through the Outback I happened upon one of
the 1 million wild camels in Australia. Glad I’m not the one who’s
the butt of the joke in this photo…

I anticipate many of the posts being about my new project–the aforementioned dreaded first novel! *GASP!*

While I’ve written a couple of long pieces before, and had several failed attempts when I was in my teens to write a novel, this is the first real attempt at the 100 000-word novel, the average length of the novels you find in the bookstores.

I’m really excited about the idea I have (more details on the plot and theme later) and very excited to get going on the writing–an enthusiasm I think you need going in. Much like a marathoner, from what I hear most or all writers hit The Wall in the course of a novel’s first draft: the point at which you’re mired in the endless middle, convinced that the book is stupid, or boring, or dull–or all of the above–and you just want to chuck it all, quit writing, and begin drinking heavily.

Posting daily and posting about what’s going on with the project will hopefully let me keep my spirits (both figurative and literal) up and make it through what will likely become the long slog of the first draft.

I heard Farley Mowat once say that he didn’t like writing, he liked having written. I completely get what he means.

Talk to you soon!

Comments Off on I clicked my heels three times…