Have aliens hijacked the Voyager 2 spacecraft? 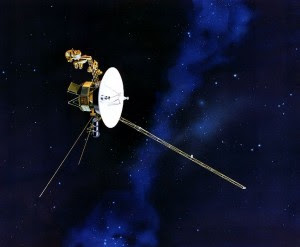 There aren’t even words to describe how much I want this to be true:

The Voyager 2 spacecraft, launched by NASA in 1977, is (along with its twin Voyager 1) the most distant human-made objects. They are approximately 10.5 billion miles from Earth and in about five years they are expected to pass through the heliosphere, the bubble the sun creates around the solar system, and be the first man-made objects to enter interstellar space.

For the past 33 years NASA has been in contact with these probes as they have been sending streams of data back to Earth for study by scientists. But on April 22, 2010, the stream of information from Voyager 2 suddenly changed. The spacecraft’s science data was received from 8.6 billion miles away in a changed format that mission managers could not decode.

NASA claims that it’s a software problem with the flight data system was the cause of the change, but German academic Hartwig Hausdorf believes that because all other parts of the spacecraft appear to be functioning properly, the change could be due to work of aliens.

He told the German newspaper Bild: “It seems almost as if someone has reprogrammed or hijacked the probe – thus perhaps we do not yet know the whole truth.”

Voyager 2 carries a gold disk with greetings in 55 languages on it in case the craft encounters other life forms. Is how the aliens have responded?

Keep your tentacles crossed that it is!

3 Responses to Have aliens hijacked the Voyager 2 spacecraft?